Please ensure Javascript is enabled for purposes of website accessibility
Log In Help Join The Motley Fool
Free Article Join Over 1 Million Premium Members And Get More In-Depth Stock Guidance and Research
By Maurie Backman - May 6, 2019 at 7:48AM

Yes, that's a lot, especially given the important financial goals we're sacrificing in the process.

It's one thing to spend a bit of money treating ourselves to life's various luxuries, but it's another thing to splurge to the point where it hurts our finances. Many Americans, however, are guilty of the latter.

In fact, the average U.S. adult spends $1,497 per month on nonessential items, according to research commissioned by Ladder and conducted by OnePoll. All told, that's roughly $18,000 a year on things we can all do without. And that's a lot of money, considering the extent to which Americans are letting their savings and other critical goals fall by the wayside. 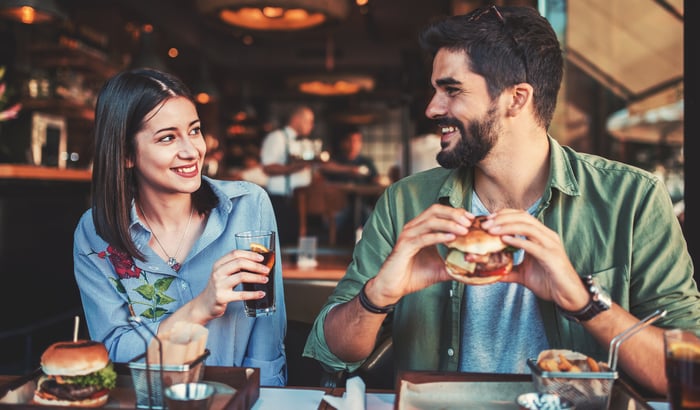 How Americans spend on luxuries

There's nothing wrong with enjoying a few luxuries here and there to make life enjoyable, but Americans are spending a small fortune on treats that are ultimately stripping them of the opportunity to save and use their money more responsibly. Here's a breakdown of what the typical American spends on nonessentials:

Now you might argue that gym classes are an essential component of staying healthy, and that rideshares are a means of traveling safely. But many of the above costs can easily be minimized or downright eliminated without impacting one's well-being. Take restaurant meals, for example. If anything, they tend to lend to overeating, and at over $200 a month, they're eating up a large chunk of the average American's income.

All of this spending on nonessentials is also causing Americans to neglect their near-term savings. An alarming 60% of U.S. adults don't have enough money in savings to cover a $1,000 expense.

If you've been in the habit of spending anywhere in the ballpark of $18,000 a year on nonessentials, then it's time to do better, effective immediately. First, set up a budget, which will show you what your various living costs really entail. Next, assess your savings, and see what it'll take to build a true emergency fund -- meaning at least three months' worth of savings in the bank. Next, identify the financial holes in your life (no life insurance, no retirement savings) and figure out how much money you'll need each month to fill them.

Once you have all of that information, you'll need to play around with different scenarios in which you trim your spending on nonessentials and see where that leaves you. For example, if you're $1,000 shy of having three months of living costs in the bank, you might cut back on restaurants, drinks, lunches, and takeout for a month or two until you've bridged that gap. From there, you might slash two of those expenses to pay for a life insurance plan, and cancel a streaming service or two and your gym membership to eke out money for a retirement account. It doesn't matter which expenses you cut, as long as you're getting yourself into a better spot financially.

Of course, if your savings are robust, you don't have unhealthy debt, and you're able to consistently fund a retirement plan and pay for the right insurance, then by all means, spend $18,000 a year on nonessentials if you can afford to. But if you can't, you'll need to kick some habits quickly -- before they destroy your finances irreparably.