Many of today's workers plan to extend their careers in an effort to delay retirement and boost their nest eggs in the process. In fact, 53% of older workers would like to work past age 65, according to a Transamerica study.

But whether they get the option to do that is another story. A separate Transamerica study found that 56% of workers wound up retiring sooner than planned.

If you have your heart set on working into your mid-60s or beyond, you should know that certain factors outside your control might propel you out of the workforce sooner. Here are a few to be aware of. 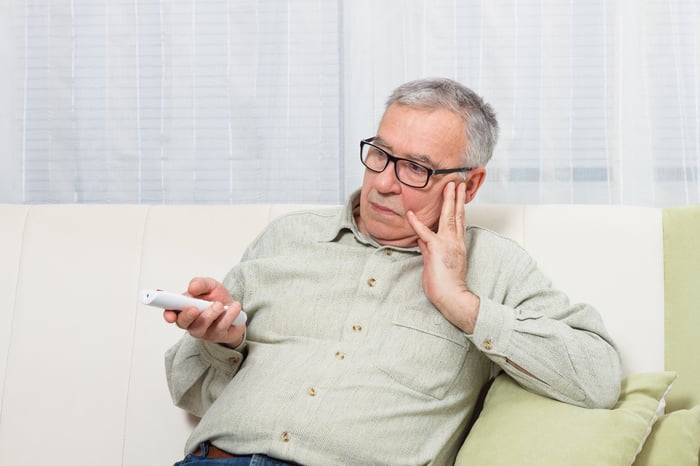 1. Your health won't allow you to work

As we age, health issues tend to creep up that limit our mobility and turn daily tasks that were once easy into actual hardships. Even if you're relatively healthy today, as you get older, you might struggle to meet the demands of your job, thereby creating a scenario where you're just unable to do it. And if your job itself isn't the issue, getting there might be. If health problems render you unable to drive, for example, you may not have the option to work.

2. You're forced into a caregiving role

As you get older, the people around you might start to experience the negative effects of aging. If a loved one reaches the point where he or she can no longer function independently, you may have no choice but to leave your job so you can focus on being a caregiver. This especially holds true if your loved ones don't have long-term care insurance and can't afford the cost of assisted living or nursing home care.

It's an unfortunate fact that many older workers are forced out of their jobs because of their age alone. Even if you're let go at work for a reason having nothing to do with your age (say, your department is downsized), you might struggle to get hired elsewhere because you look older and employers don't want to run the risk that they'll hire you, invest in training you, and lose you to retirement a year or two later.

All of these scenarios boil down to one important piece of advice: Don't wait to start saving for retirement when you have the option to do so earlier.

Many people wait until later on in their careers to begin building a nest egg because they figure they can work longer and make up for lost time. But as you can see, that option isn't guaranteed to be on the table, and the last thing you want to do is delay your savings efforts and run out of time due to circumstances you might have no say in.

On the other hand, if you start socking away money for your golden years earlier in your career, you'll be more likely to have amassed decent savings by the time the above circumstances come into play. The following table shows how much wealth you might accumulate by setting aside $500 a month over an extended period of time:

Now, imagine your plan is to work until age 70, but you're forced to retire at 60, instead. If you were to start saving $500 a month at age 25, you'd have a cool $829,000 to fall back on by age 60, assuming a 7% average yearly return on your invested savings (which is a reasonable assumption for that long an investment window). On the other hand, if you were to wait until age 50 to start saving and then find yourself forced to retire a mere 10 years later, you'd have less than $100,000 socked away for your golden years.

Working longer is a smart plan in theory, but it's one that might fall short in practice. Rather than put off retirement savings, begin setting money aside for your golden years immediately. And hey, if you accumulate enough wealth by your early-to-mid 60s, you might welcome the idea of early retirement, even if it's not what you originally planned for.