It's an easier process than you'd imagine.

Though there's no single number that defines "wealthy," having $1 million or more in assets is a good way to achieve that status. And while you'd think Americans would have doubts about their ability to accumulate such wealth, an estimated 62% do, in fact, believe that they'll become millionaires, according to GOBankingRates. If you have a similar goal in mind, you should know that it is achievable, provided you do the following three things.

You might think that to become a millionaire, you'll need to sock away loads of cash on a regular basis throughout your life. Well, you don't. You just need to start saving a decent amount from an early age, and then let compounding work its magic. 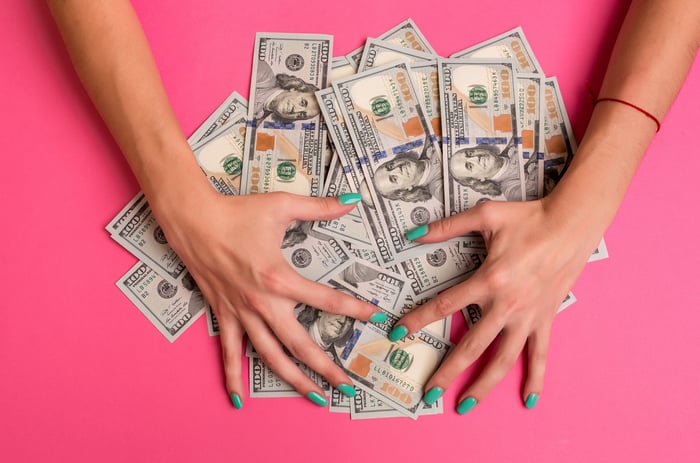 Check out the following table. It shows how much savings you might amass if you were to set aside $500 a month over time:

As you can see, if you give yourself enough time to save and grow your money, you can accumulate quite a bit without having to part with too much of your income. The longer you wait to start saving, however, the less you'll get to benefit from compounding, and the harder it'll be to hit millionaire status.

The table above assumes a 7% average yearly return on savings, which is a reasonable assumption for a portfolio loaded with stocks. If you play it too safe with your investments, however, you'll generate a much lower return, and have a harder time hitting that $1 million mark.

Imagine you were to save $500 a month over time but score a mere 4% return by focusing more on bonds than on stocks. Here's what your savings would look like:

The above figures clearly aren't pocket change, but they're also not nearly as impressive as the results we saw with a 7% return. The point? Invest in a reasonably aggressive fashion if you want to grow substantial wealth.

It's easy to talk about saving $500 a month in theory, but how easy is it to do so in practice? If you're in the habit of spending down your entire paycheck month after month, then eking out any amount to put in the bank might prove difficult. On the other hand, if you make an effort to minimize your expenses and live well below your means, you'll have an easier time saving money and investing it for further growth.

Therefore, make a point to not buy the most expensive house in your neighborhood, and drive a simple, compact car if you don't need a larger or fancier one. Similarly, don't dine out all the time, and indulge in clothing purchases and electronics occasionally, but not constantly. The more modest a lifestyle you're willing to lead, the greater your chances of accumulating $1 million -- or more.

It's encouraging to see that 62% of Americans think they'll be millionaires, but whether they actually achieve that goal is a different story. You, on the other hand, have a real opportunity to hit that milestone by saving early, investing smartly, and managing your spending wisely.