Many people are lucky enough to have health insurance through their jobs, and while it can still be costly, a large number of employers subsidize those premiums to the point that they're reasonably affordable. But when you're stuck paying for health insurance on your own, you may be tempted to forgo coverage due to the cost.

Such was a decision I grappled with back in the day when I found myself unemployed and without a subsidized insurance plan. In fact, I came very close to dropping my coverage, rolling the dice, and hoping for the best. But in the end, fear got the better of me. And I'm really thankful it did.

Talk about a close call

The reason I found myself without subsidized health insurance boiled down to a decision I made to quit a job I hated five months before I was set to get married. I'd been itching to get out of that bad situation and move over to a full-time freelancing career instead. And by the time I left that job, I actually had a few different gigs lined up to generate income. What I didn't have, however, was health insurance, and until my husband and I were officially married, there was no getting onto his plan. 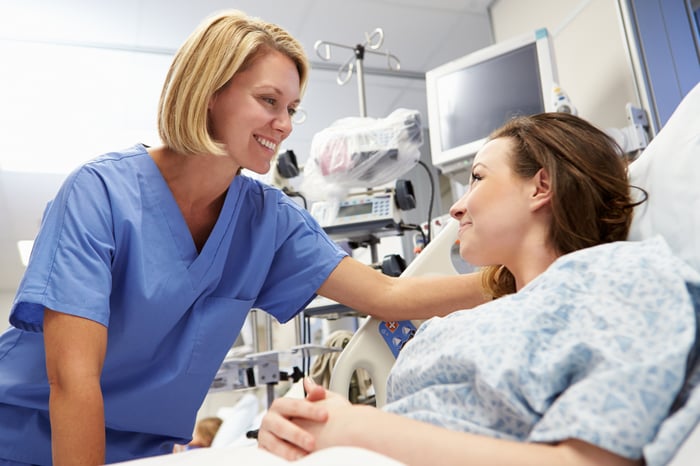 One reason this patient could be smiling: She paid her health insurance premium. Image source: Getty Images.

I therefore had three choices: retain my old insurance plan through COBRA, buy a new plan, or go without insurance for a period of less than half a year's time.

I quickly realized that finding a new plan would be a hassle, and for such a brief period of coverage, I wasn't willing to do the legwork. With that choice eliminated, I was looking at either paying close to $600 a month to keep the health insurance I had through my old job, or taking my chances without insurance. And at a time in my life when I was facing a) a drop in income and b) a costly wedding on the horizon, I wasn't super eager to shell out that kind of money. And so I decided, for a brief moment, that I'd go without insurance for a bit.

But then the logical part of my brain started working: It reminded me that accidents, injuries, and illness can happen to anyone, and that an emergency room bill could easily exceed the amount I'd be paying to have coverage. So I wrote out a check for the cost of my premium, and decided that if anything, I was buying myself peace of mind, which is hard to put a price on.

Halfway through that five-month period between leaving my job and getting married, I wound up in the ER with excruciating back and abdominal pain. Many, many expensive tests later, I was released and sent home with a plan of recovery and a bottle of painkillers. My cost for that ER visit was $100 thanks to my insurance plan. Without insurance, my bill would've topped the $10,000 mark. Thus, my $3,000 investment in COBRA coverage over the course of those five months more than paid for itself in the end.

Trust me, I was less than thrilled about having to spend all that money. But I learned a very important lesson: It's never safe to go without health insurance, and while it may be expensive if you're covering it yourself, it's a bargain compared with the cost of an uninsured ER visit.