There's something to be said about living in a large city and getting to enjoy the conveniences, amenities, and nightlife involved. But the cost of living in a city makes that lifestyle prohibitive for a large number of Americans.

On the other hand, many city dwellers are willing to make financial sacrifices to live in the middle of it all. And 55% say the costs of city living are worth it, according to a new survey by online search tool Rent.com.

The problem, however, is that many people who reside in cities are risking their finances in the process. Case in point: An estimated 41% of city dwellers say they sacrifice saving money to live where they live. 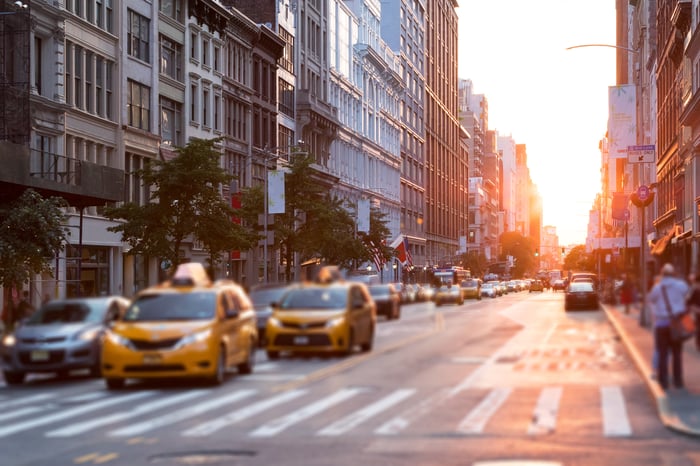 While there's nothing wrong with paying a premium to live in a city, especially if you can swing the rent, your living expenses should be such that you're able to save money consistently. And if that's not the case, then it may be time to rethink the place you call home.

If you can afford the high cost of city life, all the while putting money away for emergencies and retirement, then by all means, stay put. But if that's not the case, recognize that by living in a city, you may be compromising your finances big time.

Without emergency savings, you risk racking up costly credit card debt the minute an unplanned expense lands in your lap. The same holds true if you lose your job for a period of time.

Furthermore, without retirement savings, you risk struggling to pay the bills during your golden years -- a time in your life when working to pick up the slack may not be an option. Remember, Social Security isn't enough to sustain seniors; those benefits will only provide about half the amount needed for most retirees to live comfortably. But if you're paying a premium to live in a city and neglecting your nest egg in the process, it could make for a dire financial situation down the line.

Eke out some extra cash

If you're going to continue living in a city despite the fact that it's impacted your ability to save thus far, you'll need to prepare to make some changes to break that unhealthy habit. First, set up a budget and see where there's room to cut back on living expenses. Sharing an apartment could slash your rent costs significantly, so if you're currently living solo, that's something to consider. You might also cut back on things like restaurants and entertainment if they're eating up a lot of your income. Granted, it's amenities like those that make city living worth it, but if you're able to reduce your spending in those areas, it could work wonders for your savings.

Another option? Get a second job. Living in a city gives you access to a host of opportunities, whether it's waiting tables on weekends or working at concerts and other events. Or, find a side gig you can do from home, like writing, editing, or graphic design. If you're able to generate extra money to contribute to savings on a regular basis, you may not have to cut so many regular expenses after all.

Living in a city can be a thrilling, rewarding experience -- but don't sacrifice your finances for a piece of the action. If city life proves too expensive for you, pick up and move someplace more affordable. After all, there's always the option to visit.