The media likes to hype the holiday season as the most wonderful time of the year. But for many, it's the most financially stressful. And new data from Marcus: By Goldman Sachs highlights just how harrowing the upcoming weeks can be.

An estimated 49% of Americans think they'll likely rack up some amount of credit card debt due to purchases related to the holidays this year. And among those who expect to carry a credit card balance forward, 48% anticipate accruing $500 or more in debt. Given that 65% of Americans expect to go over budget on the holidays, the fact that roughly half will wind up in debt isn't so surprising.

If you're stressed over the idea of spending a fortune on the holidays this year -- and landing in debt as a result -- here's a better solution: Don't. Instead, make smarter choices during the next four weeks so you don't wind up strung out and miserable when you're supposed to be celebrating instead. 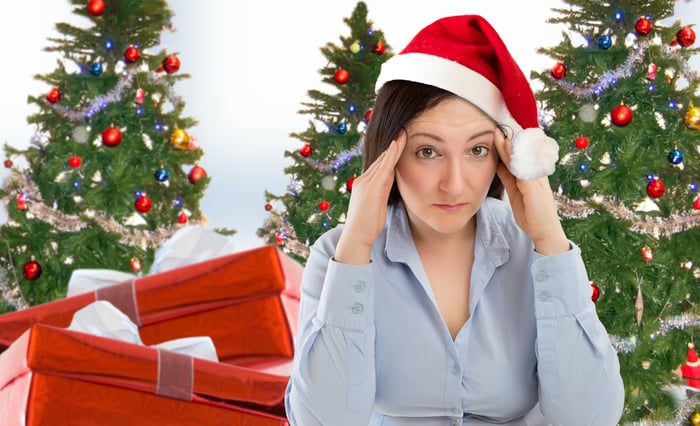 Don't give in to the pressure

A big reason so many people spend more than they can comfortably afford during the holidays is that there's pressure to go all out. After all, the holidays only roll around once a year, so there's a push to indulge and avoid missing out. But if you manage to keep your spending in check this year, the only thing you'll wind up missing out on is debt. And that's not a bad experience to forgo.

Of course, limiting your spending is easier said than done, but the best way to go about it is to set up a budget based on what you can afford to spend, and stick to it. Many people do the opposite: They spend what they want and see what their total amounts to. But if you figure out how much spending your finances allow for and work backward from there, your chances of accruing debt are much lower.

To get at that number, take a look at your cash sources for the holidays. These could include money from incoming paychecks, your savings account, or items at home you're willing to sell. Then, think about the expenses you're able to cut back on in the coming weeks to free up more money. Dining out a bit less frequently or skipping your monthly massage could put extra cash in your pocket.

Once you arrive at the amount you can afford to spend on the holidays without incurring debt, set priorities to make the most of it. For example, if traveling home to see family is important to you, price out plane tickets, subtract that amount from your total, and then spend the rest on gifts. But no matter what, stick to the limit you set. Otherwise, you're likely to join the ranks of almost 50% of Americans who think holiday debt is inevitable.

One final thing: Before you stretch yourself financially to spend on the holidays, don't hesitate to push back if you have more important uses for your money. If your emergency fund could use a boost or you want to max out your retirement plan for the year, tell your family you can't afford a flight home this season or explain to your friends that while you'd love to shower them with gifts, you'd prefer a group exchange that leaves you buying one item instead of eight.

The holidays are supposed to be an enjoyable period of the year, and if you're finding them to be anything but, it's time to set your own rules and spend in a manner that works for you.