Please ensure Javascript is enabled for purposes of website accessibility
Free Article Join Over 1 Million Premium Members And Get More In-Depth Stock Guidance and Research
By Maurie Backman - Dec 1, 2019 at 7:18AM

Women need to ramp up or risk struggling during their golden years.

Saving for retirement is crucial. Without independent savings, you risk struggling financially during your golden years. And when you think about the expenses you'll face when you're older, it's easy to see why.

Even if you manage to pay off your mortgage in time for retirement, you'll still need to cover other homeownership costs like property taxes, insurance, and upkeep. And while you won't have to pay to commute to a job, you'll still need transportation, which could mean grappling with car payments, insurance, and maintenance. Throw in the fact that your healthcare costs are likely to rise, and it's clear that saving independently is a must -- especially since Social Security is in no way designed to sustain seniors by itself.

But new data from GOBankingRates reveals a disturbing gap between men and women on the retirement savings front. Male workers contribute $2,633 per year, on average, to their retirement accounts. Women, however, contribute just $1,331 per year on average. That means women are looking at potentially retiring with half the savings as their male counterparts, and given that they tend to live longer, that doesn't paint a very promising picture. 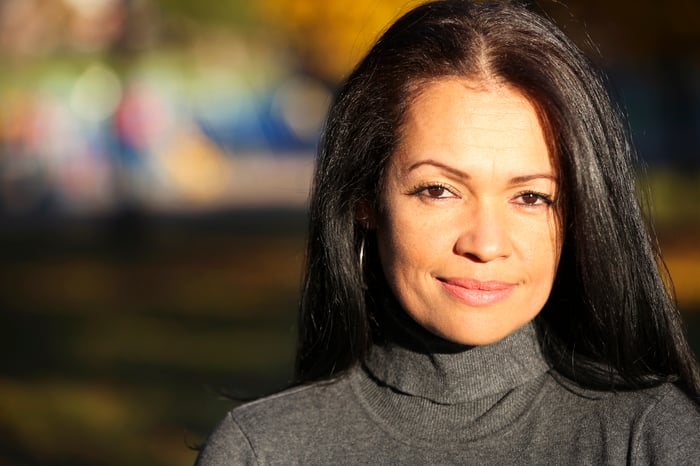 Women need to ramp up

The reason women lag behind men with regard to retirement savings could boil down to the gender wage gap. The Ascent reports that in 2018, women's median earnings were 81% of men's. And with less income to work with, women are apt to have a harder time setting funds aside for retirement.

Still, female workers need to do better. Contributing $1,331 to a retirement savings plan annually over 40 years results in an ending balance of just $266,000, even if we assume a somewhat aggressive average annual 7% return on investment -- which, for the record, is feasible with a stock-heavy portfolio.

But $266,000 isn't a ton of money in the grand scheme of retirement. Financial experts often advise withdrawing from retirement savings at an annual rate of 4%. With a savings balance of $266,000, that translate to $10,640 of annual income. Even when we factor in Social Security, that's only $17,748 a year for today's average recipient. And since women tend to earn less than men, they stand to collect lower benefits, since Social Security payments are calculated based on lifetime earnings.

Furthermore, that $266,000 figure assumes a 40-year savings window. If you don't start saving for retirement till your mid- to late 30s, you may be looking at just a 30-year savings window, which would bring your ending balance down to $126,000, assuming that same 7% return.

That's why it's critical to ramp up on the savings front if you've only been setting aside somewhere in the ballpark of $1,331 a year for retirement. How do you do that? Well, you can start by making adjustments to your current spending. Living more frugally -- say, by downgrading your cable plan, dining out less frequently, and canceling your gym membership -- could free up another $100 or so per month, thereby doubling your retirement plan contributions. Larger changes, like downsizing your home, will have an even greater impact.

The same holds true for securing a second job, since your earnings from it can go right into your retirement account. At the same time, you should also fight for fair wages at your main job. Research salary data for your industry, and if your income is below the average for workers with your job title, bring that information to your employer and ask for a wage adjustment. Boosting your salary could make it feasible to double or triple your current retirement plan contributions.

In fact, imagine that instead of saving $1,331 a year for retirement, you're able to set aside $3,000 annually instead. Over a 40-year window, that'll give you $599,000 in retirement savings, assuming a 7% average annual return. And that's a far more reasonable, and comfortable, sum to live on.

While women may have a natural disadvantage as wage earners, you can't afford to let that hurt your chances of a secure retirement. Do your best to boost your savings rate -- you'll be thankful you did later in life.