When you consider the risks you face in retirement, most of them probably center around finances. Some people may be worried about not saving enough, while others are concerned about the rising costs of healthcare and long-term care. Others may worry that they'll never be able to afford to retire.

However, there's one risk that you may not even be considering, even though it can have a drastic effect on your retirement: the risk of retiring early. 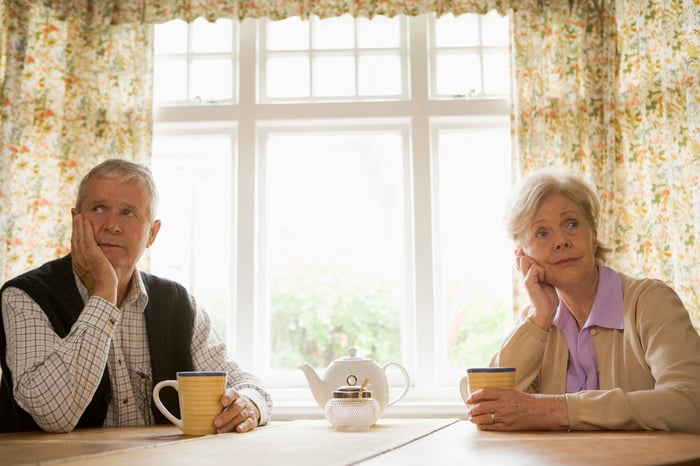 Early retirement can be a major risk for many workers

When you're planning for retirement, one common assumption is that you'll be able to choose when you retire. So if you're behind on your savings, you may choose to work a few years longer so you can catch up.

Choosing when you retire is a luxury not everyone is afforded, though, and there's a chance you may be forced into an early retirement. In fact, approximately 43% of current retirees say they had to retire earlier than they expected, primarily due to job loss or health issues, according to a report from the Employee Benefit Research Institute.

Although early retirement may sound like a dream come true for many workers who are yearning for the day they can leave their jobs, it can spell disaster if you're not financially prepared. If your savings are slim and you're banking on the ability to work past the traditional retirement age, you could be in for a rude awakening if you lose your job or become no longer physically able to work.

When you retire early, there are two major risks involved. First, you'll need to have more saved because you'll be spending more time in retirement.

Say, for example, you are laid off from your job and are forced to retire five years earlier than you anticipated. Let's also say you had planned on pulling $50,000 from your retirement fund each year in retirement. When your retirement lasts five years longer than you expected, that's an additional $250,000 you'll need that you haven't prepared for. On top of that, if you're younger than age 65 when you retire, you won't have access to Medicare yet. So you'll need to find another source of health insurance until age 65, which can be incredibly expensive.

Those few extra years can make a big difference, too. For instance, if you're 40 years old with $50,000 saved for retirement, and you're contributing $300 per month to your savings. By continuing to save at that rate, you'd have around $579,000 stashed away by age 67, assuming you're earning a 7% annual rate of return on your investments. But if you were forced into an early retirement at age 60, you'd only have approximately $341,000 saved by that time, all other factors remaining the same. So not only do you have to account for an extra seven years' worth of income, but you're also missing out on more than $200,000 in potential earnings when you don't have as much time to save.

You also won't be able to begin claiming Social Security benefits until at least age 62, so if you retire before that, you'll need to rely on other sources of income to make ends meet.

How to prepare for the possibility of early retirement

Early retirement is difficult to prepare for because you never know if or when it will happen to you. You may feel secure in your job, but if you get laid off unexpectedly in your 50s or 60s, it may be difficult to find another one. And even if you're in great health now, it's impossible to predict whether you'll be affected by a sudden illness or accident that leaves you unable to work.

That said, there are ways you can shield yourself against the risks involved in early retirement. For one, you can try to build a robust nest egg as early as you can. If you wait until the last minute to supercharge your savings, you're putting yourself at a greater risk of having next to nothing saved in the event you retire earlier than planned. But if you start saving early and work hard to grow a healthy retirement fund, though you may not have as much as you'd like saved if you're forced to retire early, it will be much better than nothing.

Another way to protect yourself is to diversify your income. When you only have one source of income, it will be a bigger hit to your finances if you lose your job. But if you have a side job or your spouse is also working, then at least you still have some money coming in if you're laid off unexpectedly. Better yet, try to find sources of passive income. That way, if you develop health issues and can no longer work, you may still have passive income to help support you financially.

One of the best ways to safeguard your finances against an early retirement is to simply understand that it's a risk many people face. Don't base your entire retirement plan on the idea that you'll be able to work forever, because there's a good chance that won't happen. When you keep in the back of your mind that your retirement schedule may not go according to plan, however, you'll be able to make smarter decisions and set yourself up for a more financially stable retirement.