Please ensure Javascript is enabled for purposes of website accessibility
Log In Help Join The Motley Fool
Free Article Join Over 1 Million Premium Members And Get More In-Depth Stock Guidance and Research
By Maurie Backman - Mar 28, 2020 at 6:18AM

Do your plans look similar?

With COVID-19 destroying the U.S. economy and forcing millions of Americans into unemployment, it's clear that the public needs help -- and that help could come in the form of a stimulus check. Though higher earners won't be eligible for stimulus money, that cash could serve as a lifeline for those whose incomes have already been impacted by the current crisis.

In fact, 40% of Americans say that if they were to receive a stimulus check, they'd use that money to buy groceries, according to GOBankingRates. And while that's a fine use of that money, the reality is that workers shouldn't be relying on a government check to cover food and other basic expenses.

A stimulus check could very well provide short-term relief to Americans who are working fewer hours, or aren't working at all, because of COVID-19. But helpful as that money may be, it really shouldn't take the place of a fully loaded emergency fund. 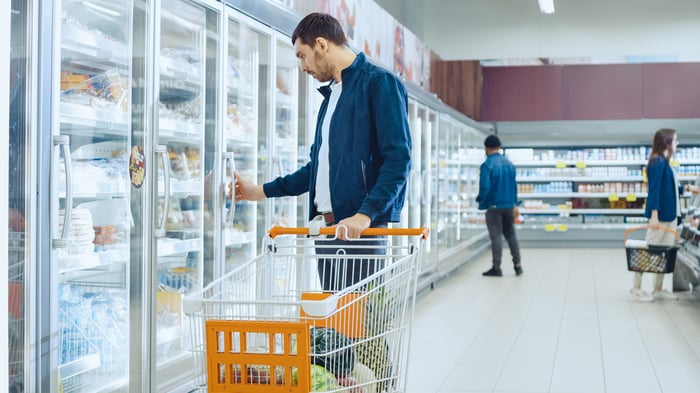 Unfortunately, about 25% of Americans have no money in the bank to fall back on, reports GOBankingRates. Another 23% have enough cash on hand to cover one to three weeks of bills, while 19% have enough to pay for about two months of living expenses. All told, only about one-third of Americans have enough money in savings to pay their expenses for three months or longer, which means that once this crisis subsides, workers without adequate cash reserves should make every effort to build some.

If you're among the roughly 50% of Americans who aren't equipped to handle a period of unemployment, remember this: Financial emergencies don't always occur on a widespread level. The current situation represents an extreme most of us have never experienced before, which is why a stimulus payment is on the table. But if you lose your job at a time when the country isn't deep in the throes of a major crisis, you can't expect the government to bail you out with a bonus check. And in that scenario, having emergency savings could spell the difference between keeping up with your bills and resorting to debt.

How do you build emergency savings? If you're out of work right now, you don't. But once you have a steady paycheck coming in, set up a budget that only allows you to spend a certain percentage of your income, and then automate the process of moving money directly from your checking account to your savings account each month. Your goal should be to accumulate enough money to cover three to six months of living expenses.

It's too soon to tell how long the COVID-19 crisis will last, and whether it will spur a full-blown economic recession. But one thing's for sure: If you're in a position where you're reliant on a stimulus check to put food on the table, let it serve as a wakeup call that you need to be better prepared for the next emergency that could strike. Get through the next bunch of weeks or months, but once things go back to normal, make building an emergency fund your top priority -- because you never know when you might need one.