Please ensure Javascript is enabled for purposes of website accessibility
Log In Help Join The Motley Fool
Free Article Join Over 1 Million Premium Members And Get More In-Depth Stock Guidance and Research
By Maurie Backman - May 7, 2020 at 7:46AM

Even though unemployment recipients get an across-the-board raise, those benefits aren't enough to keep 50% of workers afloat.

Millions of Americans have lost their jobs in the wake of COVID-19. The good news is that those who are out of work through no fault of their own can generally qualify for unemployment benefits, thereby gaining access to some income in the absence of a regular paycheck.

The amount of money you'll receive in unemployment benefits will depend on a number of factors:

But no matter what your weekly benefit looks like, right now, anyone on unemployment is entitled to a $600 weekly boost on top of that number. As part of the CARES (Coronavirus Aid, Relief, and Economic Security) Act that was passed in late March, all workers on unemployment are entitled to an additional $600 a week, even if that boost results in a scenario where they're making more on unemployment than they did while employed. Furthermore, the CARES Act also extends unemployment benefits by 13 weeks; most states max out at 26 weeks, so this brings the total number of weekly benefits workers can collect up to 39. 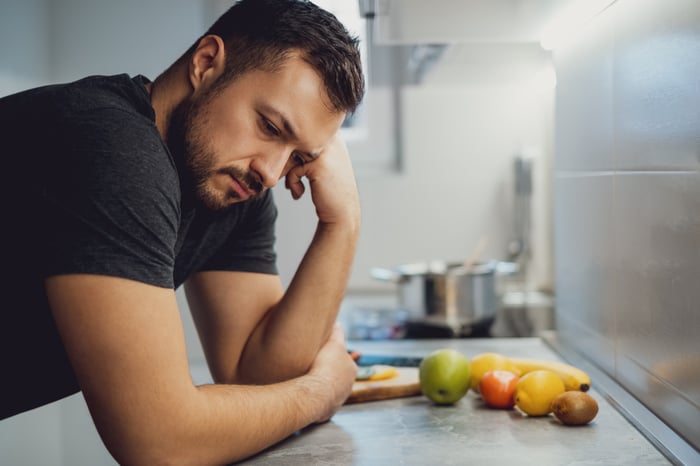 But despite what may seem like a pretty generous increase in weekly benefits, a large number of Americans who are collecting unemployment are struggling nonetheless. Specifically, 50% of those on unemployment say those benefits don't provide enough income to cover their expenses, according to a recent survey by real estate service Clever. If you're having a hard time keeping up with your bills while collecting unemployment, here are a few steps you can, and should, take.

Substantial lifestyle changes, like moving to a less expensive home, may not be feasible during a major health crisis. But if your unemployment benefits aren't enough to pay your bills, you'll need to start thinking creatively about the ways you can reduce your spending. That could mean swapping your cable package for a less expensive streaming option, or being more judicious when buying groceries. Also, if there are services you have but aren't using, like a gym membership, ask to pause them temporarily. As much as you may want to help out local business, if you're out of work, you may not be in a position to be generous in that way.

Many service providers, like utility and telecom companies, are offering customers more flexibility during the ongoing crisis. If your unemployment benefits aren't enough to cover all of your expenses, you may be able to eke out some leeway by reaching out and asking for help. The same holds true if you owe money to a mortgage company, landlord, or auto lender -- explain your plight, and there's a good chance you'll get more flexible payment terms that help you manage your limited funds.

3. Tap your emergency fund as needed

Many Americans don't have an emergency fund, but if you do, now's the time to dig into it if your unemployment benefits aren't doing enough. Of course, you don't want to go overboard -- you shouldn't take an emergency fund withdrawal to buy new furniture, spend money on restaurant food, or indulge in a new TV. But if you're having trouble paying for basics on unemployment, don't feel guilty about raiding your emergency savings.

Though unemployment benefits may be higher than usual thanks to the CARES Act, that doesn't mean you're thriving if they're your sole source of income. If that's the case, do your best to adjust your spending, reach out to the entities you owe money to, and strategically use your savings to stay afloat.