Please ensure Javascript is enabled for purposes of website accessibility
Log In Help Join The Motley Fool
Free Article Join Over 1 Million Premium Members And Get More In-Depth Stock Guidance and Research
By Maurie Backman - May 8, 2020 at 5:18AM

Retirement savings are crucial, but there's one thing preventing a large number of workers from amassing the wealth they need.

Though Social Security helps seniors pay the bills, those benefits aren't designed to sustain retirees in the absence of other income. Social Security will replace about 40% of the typical worker's pre-retirement wages, but most seniors need roughly twice that amount to maintain a decent standard of living once they're no longer earning a paycheck from work. That's where personal retirement savings come in.

But not everyone enters retirement with a loaded IRA or 401(k), and for almost 70% of workers today, saving for the future is off the table for one big reason: They have too much debt. 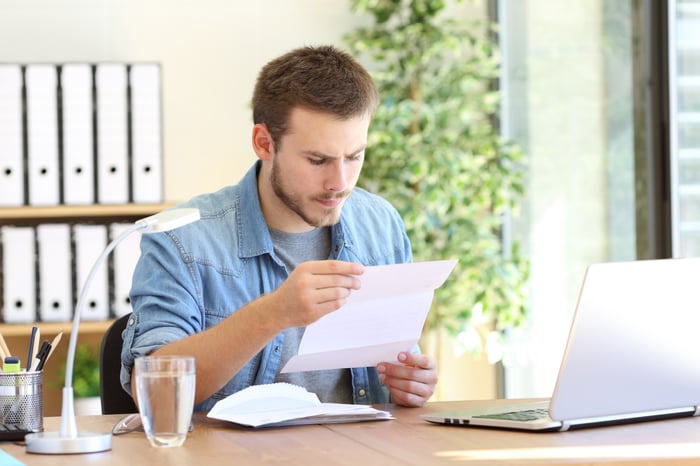 In a recent survey by the Employee Benefit Research Institute, 69% of workers say their non-mortgage debt has impacted their ability to build retirement savings. And 53% say having that debt has impacted their ability to participate in an employer-sponsored retirement plan, like a 401(k). If you're carrying loads of unhealthy debt, it's imperative that you do your best to shake it off as quickly as possible -- before your golden years really suffer because of it.

Paving the way to retirement savings

To be clear, there's a difference between good debt and bad good. Mortgage debt is considered the good kind, since it allows you to build equity in a home over time and a large amount of it won't hurt your credit score unless you fall behind on your payments. Credit card debt, by contrast, is an extremely unhealthy kind of debt because it doesn't make you money -- it costs you money, and potentially a lot of it. Plus, too much credit card debt can cause your credit score to shrink, making it harder to take on healthy debt affordably.

As such, if you're carrying debt outside of a mortgage or auto loan (which is, for many people, a necessity, as a vehicle is often needed to function and hold down a job), you should focus on paying it off quickly. Once you no longer have that debt hanging over your head, you can take the money you'd normally spend on paying it down and put it into retirement savings instead.

How do you knock out debt? The best way is to get on a budget so you understand what your expenses look like, and then cut back on any spending that isn't considered essential. That includes things like restaurant meals, vacations, and other luxuries you should only be indulging in once you have your financial house in order. If you manage to free up a few hundred dollars a month by making smarter choices, and you use that money to knock out your debt, you'll then have the option to focus on your IRA or 401(k), which is an essential part of setting yourself up for retirement.

Remember, for each year you don't contribute to a retirement plan, you lose out on the opportunity to invest that money for added growth. And if you have access to a 401(k) that comes with an employer match, you effectively leave free money on the table by not funding that account.

If you want to enjoy your senior years, you'll need enough money to live comfortably. And that means having a healthy amount of retirement savings to complement your Social Security benefits. If you've been unable to save for your senior years because of your enormous debt load, do your best to rein in your spending so you can stop throwing money away on credit card interest and start putting that cash to work for your future.