Please ensure Javascript is enabled for purposes of website accessibility
Log In Help Join The Motley Fool
Free Article Join Over 1 Million Premium Members And Get More In-Depth Stock Guidance and Research
By Maurie Backman - Aug 14, 2020 at 6:18AM

Despite the option to remove up to $100,000 from an IRA or 401(k), most people are leaving their retirement savings alone.

Once COVID-19 cases started multiplying in the U.S., the unemployment rate exploded. Now, months later, we're still in a recession, and the outbreak is showing no signs of getting better.

Recognizing the need for relief, lawmakers implemented the CARES Act back in late March. It was responsible for the $1,200 stimulus payments that went out to millions of Americans and boosted unemployment, which helped millions of jobless workers pay their bills over the past few months. Additionally, the CARES Act allowed for penalty-free retirement-plan withdrawals of up to $100,000 for savers who were impacted by the COVID-19 pandemic.

Generally, retirement plans can't be touched until you're age 59 1/2, and withdrawing funds prior results in a 10% penalty. The CARES Act, however, is waiving that penalty so that those who need money can access it from their own savings rather than go through the hassle of borrowing elsewhere. 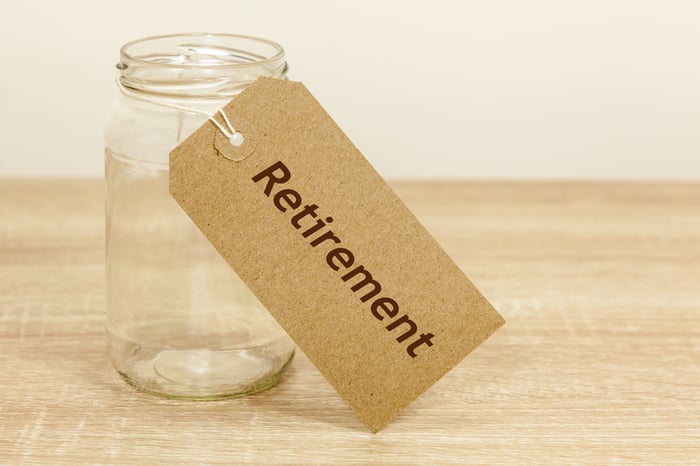 But recent data from Fidelity indicates that most people are not, in fact, tapping their retirement plans to get through the pandemic. Specifically, 98% of Fidelity's workplace clients adopted the CARES Act distribution provisions that allow for penalty-free withdrawals. But as of the end of 2020's second quarter, only 711,000 people had actually taken a CARES Act distribution from their retirement savings, representing just 3% of eligible employees.

Furthermore, most withdrawals haven't come close to reaching the $100,000 limit. Fidelity reports that the average CARES Act withdrawal taken was $12,100, while the median withdrawal amount was $4,800. And when you have a situation where the median is less than the average, it means more people took out less than $12,100 than those who took out more.

All of this is good news from a general savings perspective. Though some people may have no choice but to raid their retirement plans to get through the pandemic, leaving your savings intact is ultimately your best bet because a single withdrawal today could actually have long-term consequences.

Imagine you take a $12,000 distribution from your 401(k) to cover some near-term bills, and your 401(k) normally generates an average annual 7% return (which is a few percentage points below the stock market's average). If you're 30 years away from retirement, you'll actually end up with more than $91,000 less in your 401(k) than you would by leaving that $12,000 alone.

If too many people tap their savings in the course of the pandemic, we could have a major retirement crisis on our hands down the line. Thankfully, that doesn't seem to be the trend, but if you're going to take a retirement plan withdrawal, make sure you've exhausted other options first.

For example, it pays to raid your emergency savings before touching your retirement savings. It also pays to see if there's a way you can borrow money affordably to get yourself through the pandemic -- such as taking out a home equity loan or line of credit.

If those aren't options, and you're forced to choose between a retirement plan withdrawal and unhealthy credit card debt, go with the former. But also, withdraw the minimum amount you need to stay afloat. Just because you're allowed to remove up to $100,000 from a retirement plan doesn't mean that you should, and the less money you withdraw, the less long-term damage you'll do.