It's not easy being part of a couple -- especially when it comes to Social Security.

Choosing an age to file for Social Security is far from easy. If you file for benefits at your full retirement age (FRA), you'll get the full monthly benefit you're eligible for based on your earnings record. This is what FRA looks like, based on the year you were born:

Meanwhile, you can file for Social Security starting at age 62, but for each month you claim benefits before FRA, they'll be reduced on what's generally a permanent basis. Or you could delay your filing past FRA and boost your benefits by 8% a year, up until age 70.

Landing on a filing age is tricky enough when you're single. Claim benefits too early, and you risk shorting yourself a whole lot of income in your lifetime. But if you delay Social Security and don't end up living that long a life, you'll also lose out financially: You'll increase your monthly benefit but reduce your lifetime benefit. Difficult as that decision may be when you're single, in some regards, it's even harder when you're married. 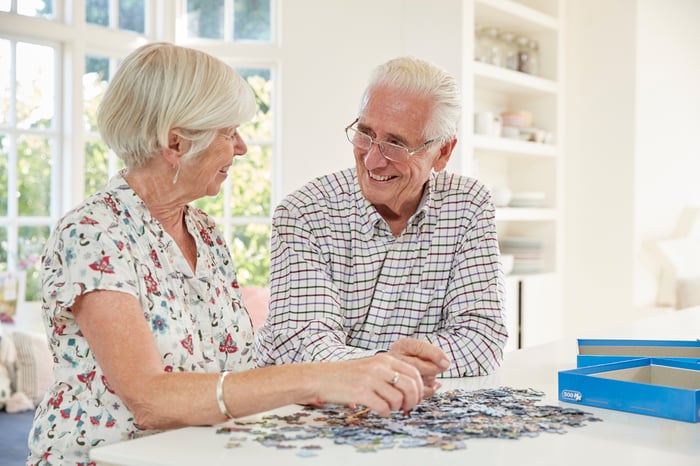 When you have a spouse to consider

The decisions you make with regard to your Social Security benefits could impact your spouse in a number of ways. First, if your spouse never worked and is counting on collecting spousal benefits, he or she won't be able to apply for them until you start drawing benefits yourself.

Now, imagine you want to wait until age 67 to file for Social Security, but your spouse wants to start collecting at 62. He or she won't be able to collect that income until you're ready to do so yourself, and that's a disagreement you'll need to work out.

Then there's survivors benefits to think about. Once you pass, your spouse will be entitled to collect a monthly benefit equal to 100% of the one you received while you were alive. The longer you wait to claim your own benefits, the more your spouse gets to collect.

But delaying benefits may not align with your plans, especially if you don't expect to live that long a life. As such, you may be stuck in a situation where you have to weigh your own needs against your spouse's, and that's not an easy thing to do.

It's for these reasons that claiming Social Security can be harder when you're part of a couple than it is when you're single. Granted, being married also gives you some flexibility. If your spouse is entitled to their own benefit, you get the option to claim Social Security on one earner's record and delay your second benefit, thereby letting it grow. That's an option single seniors don't have. But at the end of the day, if you're married, you'll have to take your spouse's needs into account when landing on a filing age, and that could make an already tough decision even more difficult.