Each year at around this time, Social Security beneficiaries eagerly await news about how much of a raise they'll be getting in their monthly checks. And in recent years, they've been overwhelmingly disappointed.

Unfortunately, 2021 will be no exception. The Social Security Administration recently announced that beneficiaries will be in line for a 1.3% cost-of-living adjustment, or COLA, for the new year. That result was based on third-quarter data on the Consumer Price Index for Urban Wage Earners and Clerical Workers (CPI-W), which measures the price changes of a basket of common goods and services. It's supposed to be a fair surrogate for the real rate of inflation -- yet for years now, Social Security checks have been losing buying power. And the reason largely boils down to one thing: The rapidly rising cost of healthcare. 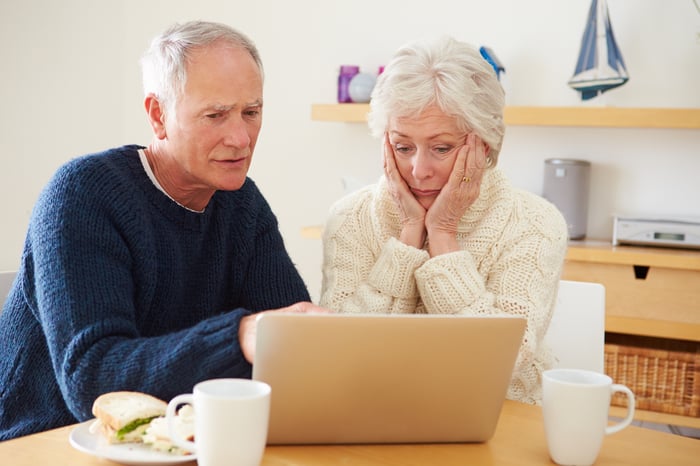 The fundamental problem with the way Social Security COLAs are calculated is that the version of the Consumer Price Index they are based on doesn't accurately represent the expenses seniors face.

Most of the differences between what the average U.S. worker and the average U.S. retiree spend their money on lay in the realm of healthcare. For the past 10 years, Social Security COLAs have averaged 1.65% annually. If that seems unusually stingy, it's partly due to the fact that there was no COLA at all for 2016, and a mere 0.3% COLA for 2017. Healthcare costs, on the other hand, have risen by an average of 2.928% annually over the past 10 years. (That calculation includes projections for the remainder of 2020.) 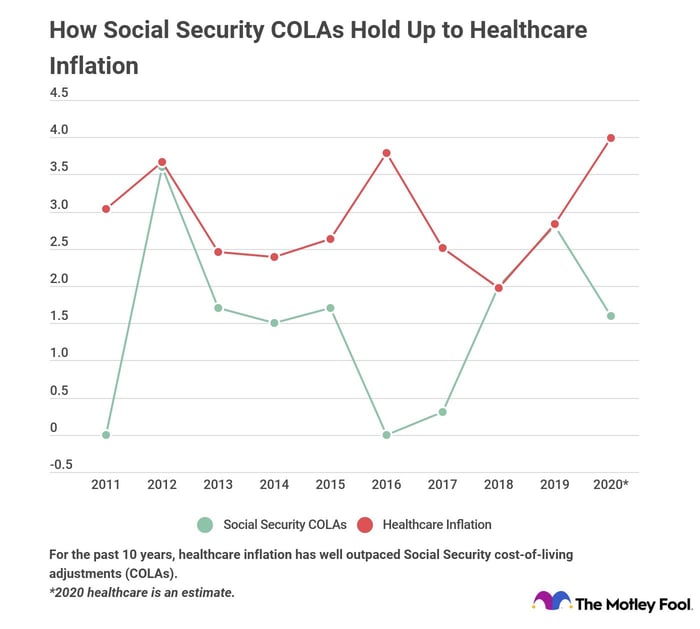 Therein lies the disconnect -- and those small-percentage differences can add up in a big way. Seniors on Medicare, for example, commonly see their premium costs rise from year to year -- increases that consistently eat away at their COLAs. But other healthcare expenses have risen, too -- Medicare deductibles, copays, drug costs, and more. All told, seniors must spend more of their money than ever to take care of their health, and they're not getting enough of a boost from Social Security year after year to compensate.

Changing the way Social Security COLAs are calculated would likely help -- specifically, switching the inflation measurement to the Consumer Price Index for the Elderly (CPI-E). That index tracks changes in the prices of a somewhat different basket of goods and services -- one that is weighted toward what seniors are actually spending their money on.

The CPI-W, for example, is influenced heavily by fuel costs, but since Social Security beneficiaries, for the most part, don't have regular commutes to work, gas prices don't eat up all that much of their income. Medical care, on the other hand, does.

If COLAs were based on the CPI-E, they'd likely be a lot more generous than they have been of late. And that, in turn, would mean less of a decline in the real purchasing power of Social Security checks.

Unfortunately, many current U.S. lawmakers aren't fans of the CPI-E, so switching the way COLAs are calculated may not happen anytime soon. But one thing's for sure: If Social Security raises continue to be based on the CPI-W, seniors will fall even further behind financially every year. And that, in turn, could have catastrophic effects. If medical care becomes too expensive for retirees to keep up with, many will have little choice but to forego it, and that's clearly a formula for disaster.