Please ensure Javascript is enabled for purposes of website accessibility
Log In Help Join The Motley Fool
Free Article Join Over 1 Million Premium Members And Get More In-Depth Stock Guidance and Research
By Christy Bieber, Maurie Backman, and Katie Brockman - Apr 3, 2021 at 6:15AM

They could help ensure you make the most of your benefits.

Social Security is one of the most important income sources for many retirees. Unfortunately, it's a confusing program with lots of complex rules. That makes it difficult for seniors to optimize their income.

The good news is, there are techniques you can employ to get the most money possible from Social Security. If you're interested in increasing your retirement income, check out these three Social Security hacks suggested by Motley Fool's benefits experts. 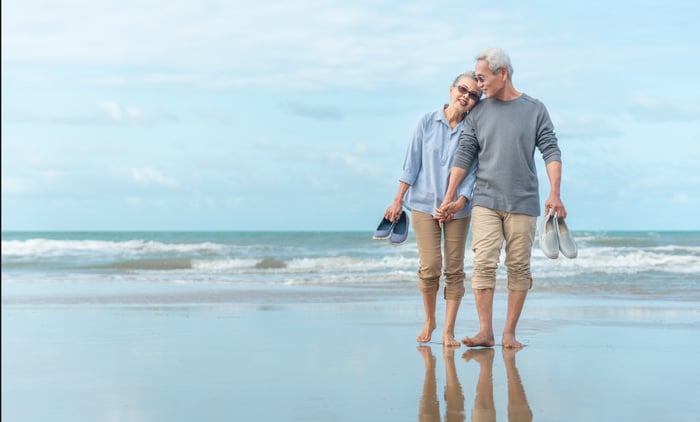 You can give your filing a do-over

Maurie Backman: You'll often hear that it's important to choose the age at which you file for Social Security carefully, because once you sign up, you're stuck with the same monthly benefit for life (not counting annual cost-of-living adjustments, of course). But actually, if you file for benefits too early and regret that decision afterward, you're not necessarily stuck with it.

One lesser-known Social Security rule is that each filer gets a single do-over in his or her lifetime. If you file for benefits ahead of full retirement age, thereby reducing them in the process, but you decide that was the wrong call afterward, you can withdraw your application for benefits and repay the Social Security Administration all of the money it paid you. Do so within 12 months of your initial claim, and you'll buy yourself the option to file for benefits again at a later date.

The point is that you're not necessarily stuck with the initial monthly benefit you lock in. If you file early because you lose your job but get hired elsewhere three months later, and you're able to repay all of the benefits you received, then invoking that do-over option could be a smart move.

In fact, the do-over option effectively allows you to use Social Security as a loan of sorts. If you need money temporarily and think you'll be able to pay it back within a year, you can file for benefits early and then snag your do-over after the fact. There's of course risk involved in going this route, but it's an option to look at nonetheless.

A Roth IRA can reduce your Social Security taxes

Your combined income is one-half of your annual Social Security benefit amount plus your adjustable gross income and any nontaxable interest.

In the previous example, then, if your combined income is $50,000 per year, you'll owe federal taxes on 85% of your benefit amount.

However, Roth IRA withdrawals don't count toward your combined income.

If you want to reduce or even eliminate federal taxes on your benefits, aim to invest the bulk of your savings in a Roth IRA. If most of your retirement income comes from a Roth IRA, that will reduce your combined income and your taxes.

For instance, say that instead of withdrawing $40,000 per year from your 401(k) in the previous example, you're withdrawing that money from a Roth IRA instead. Let's also say that your benefit amount is still $20,000 per year.

In this new scenario, your combined income is just $10,000 per year rather than $50,000 per year -- even though you're technically withdrawing the same amount each year. This drops you to the lowest tax bracket, and you won't pay federal taxes on your Social Security benefits at all.

If you still have a few years left before retirement and you haven't invested in a Roth IRA, it doesn't hurt to start stashing some cash in this type of account. Not only are Roth IRA withdrawals not subject to standard income tax, but you can also reduce your Social Security taxes. That's a win-win that can save you a lot of money throughout retirement.

Christy Bieber: Social Security's benefits formula uses average wages over your career to set your monthly benefit amount. But not your entire career -- just the 35 years in which you earned the most money (after adjusting your wages for inflation).

For many people, income goes up as they age. As a result, if you want the biggest Social Security check you can get, it can pay to stay on the job for longer than 35 years. See, if you've worked for exactly 35 years, every single year from your work history counts in your benefits determination -- even those when you might not have made much.

If you're earning a lot of money at the end of your career, each additional year you work at your higher salary will push out one of those years of low earnings. Your average wages over your career will be higher when that happens, and your benefits will grow because of it. And the more years you can stay on at work when you're earning a lot, the more you can boost your Social Security checks.

Working longer also makes it easier to delay claiming Social Security benefits, which can provide an additional annual boost to your income. That's because your monthly check amount goes up for each year that you wait to claim benefits after age 62 (when you first become eligible).

Of course, working longer takes some sacrifice -- as does taking advantage of other retirement strategies, such as a do-over after you filed. But you may decide it's worth it to get a higher monthly Social Security income for the rest of your retirement.