Please ensure Javascript is enabled for purposes of website accessibility
Free Article Join Over 1 Million Premium Members And Get More In-Depth Stock Guidance and Research
By Maurie Backman - Jul 11, 2021 at 8:36AM

At this point, I've been saving for retirement for many years and have a solo 401(k) that I fund regularly. But back when I wasn't self-employed, the company I worked for offered a regular 401(k) plan that I signed up for to save for the future.

Now one thing I did right was contribute steadily to that retirement plan for many years. But here are a few ways I mismanaged that account that I now regret after the fact. 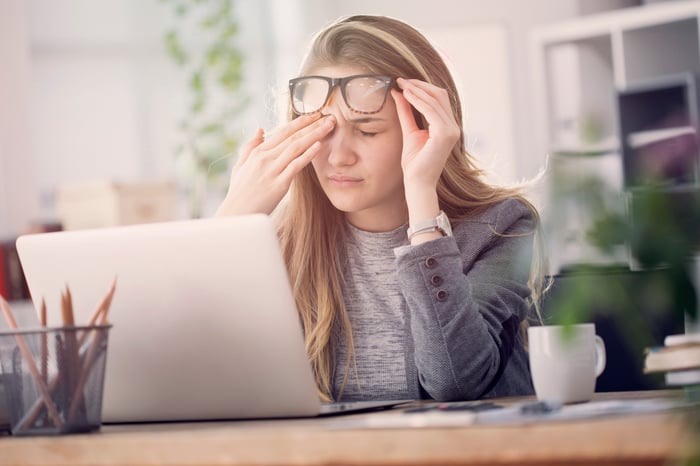 I'll be honest -- the company that offered my 401(k) wasn't a company I saw myself staying at for very long. Plus, it offered no employer match whatsoever.

As such, I wasn't particularly motivated to sign up for that 401(k) right away -- and I didn't. Instead, I waited about eight months from when I was eligible to begin participating in that plan.

Now in the end, I was able to pump enough money into that account to max out my contribution for the year. But in waiting, I lost out on many months of investment growth.

It's common practice for employers to offer some sort of 401(k) matching program, but when I found out mine didn't, I just accepted it and moved on. In reality, I should've approached our benefits team and asked the company to reconsider. Had a match been put into place, I might've snagged a few extra thousand dollars a year in my 401(k) that now, years later, could be worth a lot more when you factor in investment growth.

3. I didn't pay attention to my investments

When I first opened my 401(k), I didn't select specific investments for it. As such, my money was put into my plan's default savings option, which was a target date fund.

In fact, I'm ashamed to admit this, but I didn't actively oversee my investments in that account for about a year (keep in mind that at the time, I didn't write about investing all the time and knew little about it). As such, I lost out in a couple of ways.

First, the target date fund I had my money in wasn't very aggressive. As such, the returns in my 401(k) that year weren't much to write home about. Had I chosen a different fund or set of funds, I probably would've grown my contributions into a lot more money.

Secondly, 401(k) funds charge fees that can range from modest to expensive. The target date fund I was in fell into the latter category, and so I lost money needlessly by paying hefty fees for an investment that wasn't even getting me toward my goals.

Once I recognized my mistake, I moved my money around and put it into funds that worked better for me. Some of those funds still charged expensive fees, but I at least felt that their strategies aligned with my long-term goals and were conducive to meeting them.

Saving in a 401(k) is an important step toward securing your retirement. But if you're going to participate in one of these plans, don't make the same errors I did. Instead, sign up right away, fight for a match if you're not offered one off the bat, and pay close attention to how your money is invested to achieve optimal growth while keeping your fees to a minimum.