Please ensure Javascript is enabled for purposes of website accessibility
Log In Help Join The Motley Fool
Free Article Join Over 1 Million Premium Members And Get More In-Depth Stock Guidance and Research
By Maurie Backman – Sep 10, 2021 at 5:09AM

Here's why you could be looking at a major income cut once your career comes to an end.

Many people struggle to make ends meet despite earning a decent salary because the cost of living has consistently risen over time, making it harder for workers to keep up. In 2021, the median annual U.S. household salary is $79,000, according to the United States Department of Housing and Urban Development. 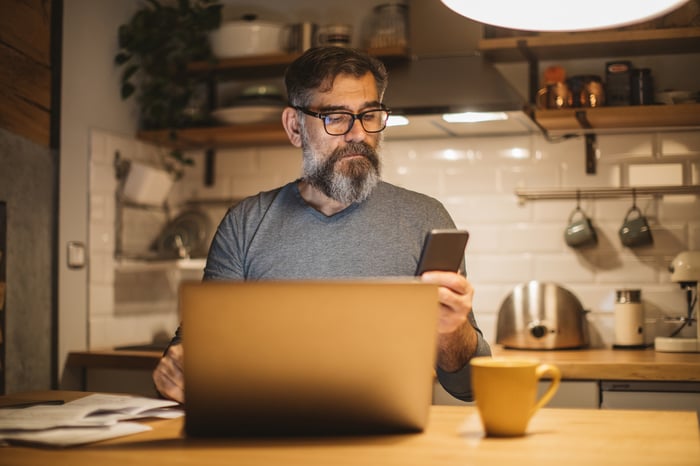 How much will you rely on Social Security?

Many seniors enter retirement without savings in their pockets. The result? They're forced to get most or all of their income from Social Security.

As of July of 2021, the average monthly Social Security benefit came to about $1,557. That's a far cry from the median monthly wage American households are earning now. It also means that if you kick off your senior years without much in the way of savings, you could end up struggling financially if you're forced to exist on those benefits alone.

To be fair, $1,557 represents the average monthly Social Security benefit on a per-person basis, not a household basis. But still, it's fair to say that $1,557 a month isn't a lot of money to live on.

Compounding the issue is the fact that Social Security may be forced to implement benefit cuts as early as 2034, which is the year the program's trust funds are expected to run dry. Once that happens, benefits could be reduced by as much as 22%, leaving seniors who rely heavily on Social Security to struggle even more.

Don't set yourself up for financial failure

While there's nothing wrong with anticipating some income from Social Security during your senior years, those benefits really shouldn't be your primary source of money. Rather, you should do your best to save independently for retirement so you aren't forced to take a major pay cut later in life.

Say you're earning $79,000 a year at present and start socking away 10% of your salary for retirement on an annual basis. Do so for the next 25 years, and you'll end up with a $500,000 nest egg if your invested savings deliver a 7% average annual return. That 7% is actually a bit below the stock market's average, so it's a reasonable assumption.

Let's assume you withdraw from your savings during retirement at an annual rate of 4%, which is what many experts recommend. That leaves you with $20,000 a year, or $1,667 a month, in income. Add that to a $1,557 Social Security benefit, and suddenly you're looking at a monthly income of $3,224. That paints a better picture for someone who's used to a monthly income of $6,583 at present.

While Social Security may indeed end up being an important income source for you, if you rely on it too heavily, you could end up struggling financially later in life. And if you're still not convinced, ask yourself if it's possible to manage your expenses on a mere $1,557 a month. If you don't think that's doable, then you'll need to start building savings of your own, even if that means starting small and working your way up over time.