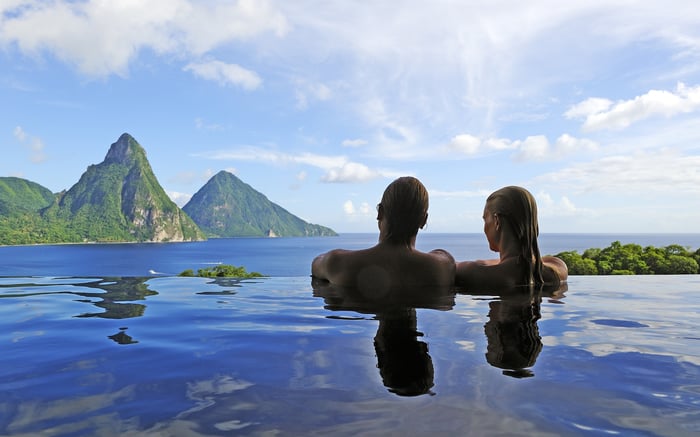 How would you spend your early retirement? Source: Jade Mountain St. Lucia.

Most of us would love to retire early, but most of us also assume we won't be able to. Don't be too hasty in your thinking, though. For some people, retiring early is almost a piece of cake. For others, it will take more work but is still achievable. Read on and see where you fall.

The easiest way to retire early

If you're young and disciplined, you have the easiest path to early retirement. Young people usually don't have as much money as their older counterparts, but they have the secret ingredient of wealth-building: time.

For example, if you started investing at age 20 and socked away just $2,000 per year for 40 years, it would grow to nearly $1 million (growing at 10%). The more time your money has to grow, the more powerfully it can grow. You can accumulate even more and retire even earlier if you invest regularly and increase your contributions over time.

Of course, if you're already 40 years old and you haven't been saving and investing for many years, it's a bit too late to start early. Still, all is not lost. If you're willing to be aggressive about it, you might be able to retire early -- or at least earlier than you expected to retire.

My colleague Chuck Saletta put together a great table showing how much you need to save and invest in order to accumulate a million dollars, depending on how far you are from retirement. For example, if you're 40 and hope to retire at 60, and you estimate your investments will grow at 10% in an environment with an average inflation rate of 3% (roughly the historical norm), you'll have to sock away $2,378 each month, or $28,500 per year. That's clearly a tall order, but even if you don't quite manage that, if you still sock away as much as you can, you can improve your retirement. Knowing how much to shoot for is a great start.

Below are a few ideas that might help you save more and retire early. If you have some more ideas, especially ones that have helped you retire early, share them below in the comments section.

First, automate savings whenever possible. If you have a 401(k) at work, try to max out your contributions to it. Beyond that, you may also be able to have IRA contributions automatically deducted from your paycheck.

You can also make a game or contest of spending less. If you live with a partner or spouse, you might take turns preparing meals, seeing who can spend the least on a satisfying and nutritious meal. If you live alone, you could compete with friends, or just aim to top your personal best. You might spend $88 one week on food but then be dethroned by someone who spent $76. Alternatively, perhaps buy an inexpensive basket of ingredients at the market and see what meals you can make from it. If others start with the same basket, you can have fun by comparing notes.

Consider not using credit cards at all if you're apt to make impulse purchases. Studies have shown that people spend less when paying with cash. If you're disciplined enough to keep your spending under control, though, look into getting a card that gives you cash back. American Express' Blue Cash cards, for example, offer up to 6% back on supermarket purchases, up to 3% back on gas, and 1% back on most other purchases. A card like that can easily generate hundreds of dollars for your retirement account.

Give some thought to when you want to start collecting Social Security. There's no one-size-fits-all answer, and it's true that delaying benefits will boost your ultimate benefit by 8% per year beyond your normal retirement age. On the other hand, if you start collecting early, at age 62, your monthly checks will be lower, but you'll get far more of them. This is the right move for some, especially if you expect to live a long life and have sufficient income from other sources to support you in retirement. The Social Security Administration offers some guidance and tools to help you with this decision. Getting an estimate of your expected monthly benefit at different ages can be a big help in figuring out when (or if) you can retire early.

Think outside the box, too. For example, you can save big-time on gas and car maintenance if you bike whenever possible. And if you can manage it, selling your car and getting by on two wheels exclusively could also save you thousands in car payments and insurance. If you have more house than you need, you should consider downsizing in order to save on mortgage payments, taxes, and utilities. These kinds of sacrifices aren't for everyone, but if you can bring yourself to make them, they can make the path to early retirement much shorter.

You may not be young anymore, but you can still make the most of the time you have by not putting off financial planning. You may be able to retire early by taking action -- starting today.

How to Retire Early: It May Be Easier Than You Thought @themotleyfool #stocks Next Article
Current