Please ensure Javascript is enabled for purposes of website accessibility
Log In Help Join The Motley Fool
Free Article Join Over 1 Million Premium Members And Get More In-Depth Stock Guidance and Research
By Cory Renauer - Jan 19, 2016 at 7:19AM

See how much some drugmakers could lose if Medicare pegged drug price increases to inflation.

In response to public outrage over rapidly escalating prescription drug prices, leading Democratic presidential candidates Hillary Clinton and Bernie Sanders have made reducing these costs cornerstones of their respective platforms. Different drugmakers raise prices for different reasons, and a blanket ban on price increases would certainly stifle the development of groundbreaking therapies on the whole. However, allowing Medicare to demand additional rebates when drug prices rise faster than the underlying rate of inflation, or at least using inflation to derive an acceptable rate of increases would be a fairly straightforward way to begin addressing the problem.

Over the past year the iShares Nasdaq Biotechnology ETF has handily outpaced the broader S&P 500, but not without a great deal of volatility. 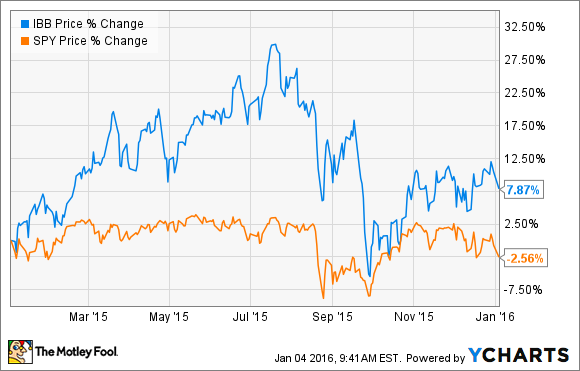 The industry had its fair share of market-moving headlines last year. Perhaps none were more significant than outrage over Turing Pharmaceuticals' -- led by "pharma bro" Martin Shkreli -- decision to hike the price of rare-disease drug daraprim more than 50-fold overnight.

Shkreli may have catapulted the practice of rapid price increases into the spotlight, but this problem didn't begin with daraprim. Swathes of drugmakers have been quietly raising drug prices faster than they probably should for years. You may be surprised to learn a viable solution has been under our noses the entire time.

There are plenty of differences between the two government run healthcare programs, Medicare and Medicaid. Perhaps the most curious has been their differing approach to prescription drug costs.

While Medicaid included optional outpatient prescription drug coverage at its outset, Medicare was more concerned with out of control hospital costs for retirees. Over the past several decades Congress has amended Medicare to include coverage for most of the same drugs, but without inflation pegs and other cost controls that Medicaid enjoys.

Scary because it's true
A report issued last spring from the Department of Health and Human Services says inflation-based cost controls are working for Medicaid. According to the report, Medicaid ends up paying far less than Medicare for the same drugs. In fact, more than half of rebates received by Medicaid are of the inflation-based add-on variety.

From time to time there are good reasons for drug prices to escalate quickly, but last year the Centers for Medicare & Medicaid Services, or CMS, shelled out more than $143 billion for Medicare's prescription drug spending. According to the World Bank, the rate of inflation in the U.S. -- as measured by the consumer price index -- was a paltry 1.6% in 2014.

The CMS recently published 2014 pricing figures for a significant chunk of the prescription drugs it spends billions on annually. We're going to take a look at Medicare spending for two drugs with prices that increased far above the rate of inflation. We'll look at the Lantus family of diabetes medications from Sanofi (SNY 2.19%) because they're a significant part of the overall CMS budget. We'll also look at smaller player Horizon Pharma (HZNP 0.55%), which increased the price of arthritis pain reliever Vimovo more than fivefold in 2014.

It may be impossible to accurately estimate the potential impact of any candidate's proposals. What I can do is illustrate the impact a Medicaid-esque policy of inflation-based rebates might have had on Medicare reimbursements for Sanofi and Horizon Pharma.

Two OTC drugs, one expensive pill
Horizon Pharma found itself embroiled in controversy last fall when pharmacy benefit manager Express Scripts terminated its relationship with a specialty pharmacy that was a primary dispenser of Horizon products. Some might say Horizon was asking for trouble when, in 2014, it raised the price of Vimovo 543% after acquiring it from AstraZeneca.

Although Vimovo is essentially naproxen coated with Nexium's active ingredient, esomeprazole, Medicare spent $1,826 per patient on the drug in 2014, or $38.9 million. With total sales of $296.9 million in 2014, it looks like Medicare spending on Vimovo alone comprised 13.1% of Horizon Pharma's top line.

If Vimovo sales to Medicare had been limited to an increase of just 1.6%, instead of 543%, net sales of the drug to Medicare that year would have been about $6.1 million. In other words, Medicaid-style inflation rebates would have lopped off around $32.8 million, or 11% of Horizon's top line that year.

What about a big player?
While Vimovo's fivefold increase represents the sort of price gouging that pushed drug pricing into the political spotlight, Horizon isn't the only company that should fear an emboldened Medicare. In 2014, the Lantus family of diabetes medications cost Medicare $3.7 billion. During that year Sanofi raised the price of Lantus and Lantus Solostar 41% and 27%, respectively.

Had Lantus' price increase that year been limited to just 1.6%, it would have knocked roughly $885.6 million from Sanofi's top line, reducing total revenue by about 2% for that year.

Putting it together
Clearly, Sanofi has less to fear from inflation-based rebates than Horizon Pharma, but it's important to point out a few things. First, big players like Sanofi sell dozens of different drugs to Medicare, so the cumulative effect would be much larger than a 2% reduction in revenue. Also, raising per-unit prices generally doesn't include a corresponding increase in cost of goods sold. In other words, price increases widen profit margins in a way increased volume can't.

Another important fact to bear in mind is that rebate schedules are considered proprietary and the CMS is not allowed to disclose just how much it received. This means that the drugs above could be cutting hefty rebates to plan sponsors, and in turn Medicare, but the figures above won't reflect it.

One company with little to fear from inflation-based rebates for Medicare is Gilead Sciences. The per-unit cost of its megablockbuster, Sovaldi, to Medicare didn't change in 2014, although many would argue it was too expensive in the first place. If there's a lesson to be learned here, it's that more innovative drugmakers have less cause for concern.

Given the generally dismal rate of meaningful legislation passed over the past several years, I hardly expect Medicare will be given the same inflation pegs Medicaid enjoys in the foreseeable future. That doesn't mean you should completely rule out some form of cost controls over the lifetime of a long-term investment.

Now might be a good time to look at the drugmakers in your portfolio. If nothing else, weeding out companies that rely on rapidly increasing prices of existing drugs will help you stay calm the next time a presidential candidate raises the issue.