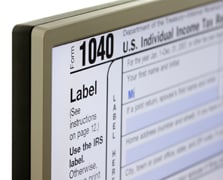 When you look through tax laws that save taxpayers money, you'll find that many of them are aimed at people with high-enough incomes to take advantage of them. With one tax provision, however, ordinary Americans can get write-offs worth thousands of dollars, while the rich aren't eligible to deduct anything at all from their taxable incomes. Let's look more closely at one of the simplest tax breaks available on your tax return to find out who benefits the most -- and who gets left out in the cold.

Personal exemptions and you

To take full advantage of personal exemptions, you have to know how the tax laws define a dependent. Most dependents are children of the taxpayer in question, under age 19 at the end of the year or a student under age 24 or disabled. The child must live with you for more than half the year, with exceptions for attending college, and the child must not provide more than half of his or her financial support during the year.

However, dependents need not be children of the taxpayer. Parents, grandparents, or others who live with you all year, who have minimal income of less than $4,000, and for whom you provide more than half the financial support for the year can also qualify as dependents.

Specifically, for 2015, you can see the threshold amounts for various filing statuses below.

How the phaseout works is a little complicated. For those other than married filing separately, you lose 2% of your total personal exemption for every $2,500 your income is above the threshold. Portions of $2,500 force you to round up, which means you'll lose more. For example, a single person whose income is $258,350 loses 2% of their personal exemptions even though they're only $100 above the threshold.

Notice that the phaseout takes away the same percentage of your exemptions no matter how many of them you claim. This costs those with large families more than those with smaller ones, because the total exemptions that a large family claims will typically be higher.

Don't miss out
Given how high those income levels are, though, it's not surprising to find that the vast majority of those filing returns are able to claim their portion of what on average is a more than $8,000 tax break for American taxpayers. The ability to reduce your taxable income that much is definitely worth making sure you get right.

Find Out How the Average American Taxpayer Got This $8,094 Tax Break @themotleyfool #stocks Next Article
Current