Social Security is the U.S. government program that distributes retirement, disability, and survivors' benefits, and it's a great source of income for retirees for many reasons. For one thing, benefits go up periodically to keep pace with rising prices. These increases to Social Security benefits are called "cost-of-living adjustments," or COLAs. Cost-of-living adjustments occur each year that there's an increase in the Consumer Price Index for Urban Wage Earners and Clerical Workers (CPI-W).

These increases are usually relatively small; in some years they're nonexistent. There are also circumstances where there is a COLA adjustment but benefits don't actually go up, because of increases in Medicare premiums deducted from Social Security checks. Still, COLAs aim to protect the buying power of seniors, so it's important to understand how they work.

This guide will explain everything you need to know about Social Security COLAs; you'll understand how Social Security raises are calculated, what will affect the raise you receive, and why your raise doesn't always mean you get more money. You'll find out:

What are Social Security COLAs?

How are Social Security COLAs calculated?

Social Security COLA adjustments are pegged to growth in the Consumer Price Index for Urban Wage Earners and Clerical Workers, or CPI-W. The CPI-W measures the average change in prices paid over time for consumer goods and services purchased by urban wage earners and clerical workers. Prices are tracked every month to determine how they're changing.

Eight major spending categories are tracked to determine changes in prices in order to calculate the CPI-W. These are:

In looking at the CPI-W, the Social Security Administration uses a particular set of data -- that from the third calendar quarter, consisting of July, August, and September. The SSA takes the average of the CPI-W for these three months of the current year, and compares it to the highest third-quarter average CPI-W ever recorded. The past CPI-W that's compared to the current year is called the "computation quarter."

Usually, the "computation quarter" ends up being the third quarter from one year before. This makes sense, because prices tend to go up from year to year instead of going down. So, to calculate the COLA beneficiaries would receive in 2019, the SSA took the CPI-W for July, August, and September 2018 and compared this to the highest average CPI-W in any prior year.

You can find the CPI-W dating back to 1974 on the Social Security website. Let's look at an example using data from 2018 to see how COLAs are actually calculated:

Since 2017 had the highest average CPI-W of any past year before 2018, we'd compare the 2018 average for these three key months to the 2017 average CPI-W for the same three months:

How much are Social Security COLAs?

Social Security COLAs vary depending on how much the CPI-W changes from year to year. The table below shows COLAs for every year dating back to 2010:

Why would there be no COLA?

According to the Social Security Act, there's an automatic COLA only if the average CPI-W in the third quarter of the current year is higher than the CPI-W in the computation quarter. But sometimes this doesn't happen. This can get confusing, so let's look at an example.

Here's what happened with the 2010 COLA. Remember, the 2010 COLA was calculated by comparing the 2009 CPI-W with the CPI-W from past years:

And here's what happened with the 2011 COLA, which was calculated by comparing the 2010 CPI-W with the CPI-W from previous years:

How can I find out what the annual Social Security COLA is?

The Social Security Administration generally announces COLAs well before the notice is sent to beneficiaries in December. In fact, the SSA announced the 2019 COLA on Oct. 11, 2018. You can watch the news to see reports of COLA adjustments (The Motley Fool always has them), or you can visit the SSA website, which addresses COLAs periodically, to see if there are any updates.

When does the COLA become effective?

Are Social Security COLAs actually a good measure of the rising cost of living?

You probably noticed above that the price index used to calculate Social Security COLAs is called the Consumer Price Index for Urban Wage Earners and Clerical Workers. Perhaps that gave you pause -- after all, senior citizens who are collecting Social Security benefits are usually not urban wage earners, nor are they clerical workers.

In fact, the choice of the CPI-W to calculate Social Security COLAs has been called into question numerous times, because urban wage earners and clerical workers tend to spend their money on different things than senior citizens do. Seniors usually spend a larger share of their income on housing and healthcare compared with younger workers, for example. And they may spend less money on other expenditures, such as entertainment and transportation. Since the CPI-W gives more weight to spending categories where seniors don't spend heavily, and less weight to categories where they do spend heavily, using the CPI-W may not adequately measure the actual inflation that seniors experience.

There is actually another price index, called the Consumer Price Index for the Elderly (CPI-E), which many experts argue should be used to determine COLAs instead of the CPI-W. The CPI-E gives far more weight to housing and healthcare than the CPI-W does, as the chart below shows: 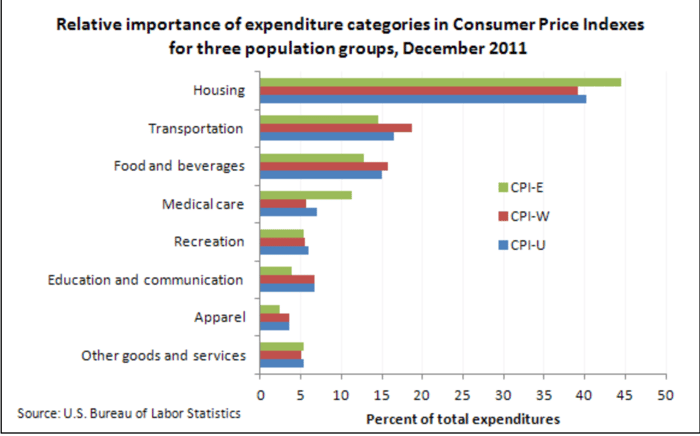 A switch to using the CPI-E instead of the CPI-W to calculate COLAs would result in Social Security recipients receiving slightly higher COLAs each year. These small additional sums of money would add up over time. For example, if COLAs were calculated based on the CPI-E instead of the CPI-W over a period of 30 years, a hypothetical beneficiary who earned the average national wage would receive at least $100 more in benefits each month.

This change may be justified, as seniors lose ground under the current COLA formula when healthcare and housing costs rise faster than Social Security benefits do. In fact, since 2000, benefits have lost a full 34% of buying power.

The Bureau of Labor Statistics also created an index called the Chained Consumer Price Index for All Urban Consumers (C-CPI-U). The chained CPI works differently than the other price indexes, because it assumes people will change their buying habits if some prices go up. For example, the Chained CPI assumes that if the price of beef goes up, people might buy more pork and less beef. Some have also argued that the Chained CPI should be used to calculate COLAs. This would result in a smaller increase in benefits, reducing the cost of the Social Security benefits program.

Why do COLAs not always result in increased Social Security benefits?

When Social Security announces a COLA, you might assume that seniors receiving Social Security checks will get a raise equal to that adjustment. Unfortunately, this isn't always the case. That's because you have to account for Medicare premiums.

Medicare Part B charges monthly premiums for senior citizens who receive health insurance coverage through the program. Premiums are generally deducted directly from Social Security checks before the check reaches the recipient. And these premiums go up over time. The premium that's set by Medicare each year is called the standard premium.

These provisions mean seniors may pay less than the standard Medicare premium -- for a while. If this is happening and a COLA occurs, though, seniors have to catch back up to paying the full premiums. This can result in a big jump up in Medicare costs that eats up the entire COLA adjustment.

In 2017, for example, the standard Medicare premium was set at $134. But there was a really small 0.3% COLA in 2017, so the hold harmless provision meant most seniors had only $109 in Medicare premiums deducted from their Social Security checks. All these seniors were paying $25 less than the actual cost of Medicare premiums.

The standard Medicare premium remained at $134 in 2018 -- but that year, seniors got a COLA that amounted to an increase in benefits averaging about $27 per month. The problem: Seniors now had to pay that extra $25 in Medicare premiums that the hold harmless provisions had protected them from in the previous year. So, the $25 premium increase took nearly all of the $27 average raise, and about 70% of retirees saw no extra money in their Social Security checks in 2018, even with a 2% COLA.

So, long story short: If Medicare premiums go up as much as or more than your COLA, you'll theoretically get a raise -- but won't see any extra cash, because the additional money is taken right out of your check to pay for Medicare.

COLAs are calculated based on changes in a pricing index called the CPI-W, which measures changes in prices in eight key spending categories including food, housing, transportation, and entertainment. The CPI-W may not be the best pricing index to calculate COLAs, because it measures changes in the prices of goods and services used by urban wage earners and clerical workers. Some argue COLAs should instead be pegged to the CPI-E, which is a better measure of pricing changes affecting elderly people. The use of the CPI-W instead of the CPI-E has resulted in smaller benefits increases over time, and Social Security benefits have lost buying power as a result.

Because COLAs are percentage increases in your benefits, if you receive larger Social Security benefits, your COLAs will be worth more. This is one reason it's a good idea to try to increase the Social Security benefits you receive. You can increase your benefits by working longer to earn delayed retirement credits, or by aiming to maximize your income over your working life.

You can also advocate for the SSA to switch to the CPI-E, which would likely result in higher Social Security COLAs each year.