You may be owed money from the IRS that could really come in handy right about now.

In the U.S., taxes work on a pay-as-you-go basis, and it's not a perfect system. If you're a salaried worker, you claim allowances on your W-4 withholding form each year, and based on that information, your employer holds back a certain portion of your income for tax purposes that gets paid to the IRS.

Most tax-filers don't just break even at the end of the year, though. The majority of people who file a tax return are owed some amount from the IRS, while others wind up owing the IRS money. Rarely do things work out perfectly, and it's because there are factors outside of your salary that dictate what your tax burden looks like (for example, what your outside income and deductible expenses entail).

Of course, the IRS isn't in the business of just giving out refund money. Rather, you have to ask for it, and you do so by filing a tax return each year. And if you don't file a tax return for a year you're owed money, you risk forfeiting your refund. 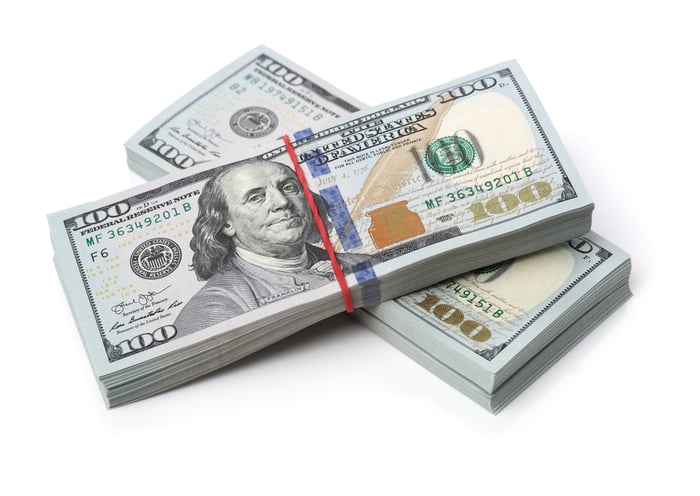 That's precisely the risk a large number of Americans may now be taking. The reason? The IRS is holding onto more than $1.5 billion in tax refunds from the 2016 tax year because an estimated 1.4 million people never filed a return back then. And with this year's tax deadline rapidly approaching, those owed a piece of that money only have a few more days to claim it.

Don't give up cash that's yours

Normally, you only get three years to file an old tax return from its initial due date and collect any refund you're due. But this year, you get a little extra time, because the regular April 15 tax-filing deadline was pushed back to July 15 to give Americans more time to deal with their taxes in light of the COVID-19 outbreak. As such, if you're still sitting on your 2016 tax return, you have another week and change to get it done or risk forfeiting money. And given the number of people who struggling financially due to the ongoing recession, giving up money is an unwise thing to do right about now.

The IRS estimates that the midpoint for potential 2016 refunds is $861 -- meaning, half of refunds will be less than that amount, but half will also be more. That's not a small sum to forgo, so if you never filed a tax return in 2016, get moving as soon as you can. The good news is that if your income is under $69,000, you're eligible to file your taxes for free. And either way, it pays to do so electronically, as that will expedite the processing of your return and any refund you're due in light of it.

Keep in mind that if you're owed money from the IRS for 2016, you won't get in trouble for filing your return late. Not so surprisingly, the agency doesn't mind hanging onto your money longer; it only minds when you don't pay on time.