Most people who file taxes wind up getting money back from the IRS in the form of a refund. But what if you're in the minority of people who owe money?

In 2019, nearly 8 million filers wound up with an underpayment on their hands, and that can make for a tricky situation if you don't have cash at the ready to make the IRS whole. The good news, however, is that you do have some options for dealing with a tax bill you can't cover in full -- or at all. 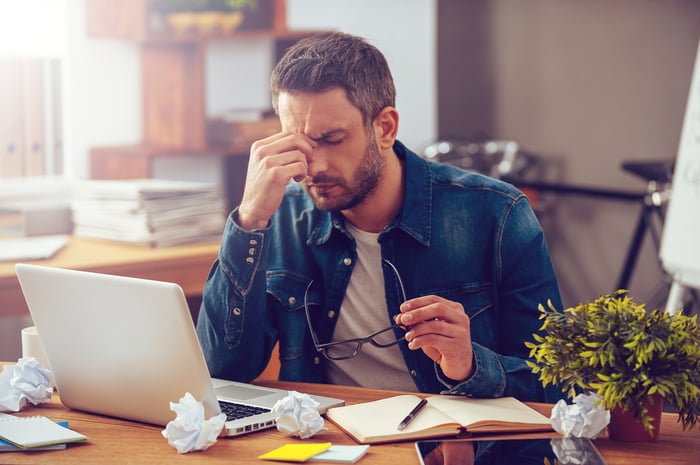 File your return on time

If you owe the IRS money but can't pay, the most important thing to do is at least be timely in filing your tax return. If you're late, you'll be hit with a very expensive failure-to-file penalty that will only make a difficult situation even worse.

To be clear, there's no penalty to be had if you're late with your tax return but the IRS owes you a refund. In that case, you're really just penalizing yourself by delaying that money. But if you owe money on your taxes and submit your return after the deadline, the failure-to-file penalty will cost you 5% of your unpaid tax bill for each month or partial month your return is late, up to a maximum of 25% of that total. Ouch.

Now if you're unable to pay the IRS what you owe in time for the tax-filing deadline, you'll also face a late payment penalty equal to 0.5% of your outstanding tax bill per month or partial month you're late. But as you can see, the failure-to-file penalty is 10 times as harsh, so it's best to avoid it at all costs.

Get on an installment agreement

The IRS is surprisingly amenable to giving filers more time to pay their outstanding tax bills. If you can't pay your total debt in full, sign up with the IRS for an installment agreement. Under one of these arrangements, you'll still be charged interest and penalties, and you'll generally pay a modest fee to set one up. But here's what won't happen -- the IRS won't seek to garnish your wages as a result of that outstanding tax bill. Rather, you'll collect your paycheck and you'll work with the agency to get that debt paid off in due time.

Submit an offer in compromise

But don't get too excited about this idea. The IRS doesn't tend to settle for less money easily. To get an offer in compromise accepted, you'll generally need to prove to the IRS that you don't have the ability to pay the full amount you owe, and/or that doing so would create an unusual financial hardship.

Remember, the IRS will let you get on an installment agreement to pay your tax bill over time. But if an injury, for example, makes it so you're no longer able to hold down a job, that could sway the IRS to accept a lower amount than your total tax bill. After all, if your ability to earn an income has changed, the agency may be convinced that that debt is truly unpayable or that paying it in full would create an undue hardship. But for the most part, if you have the ability to make good on your tax debt eventually, you're unlikely to get any of it wiped out.

Owing money on your taxes is a lousy situation to land in, but if it happens to you, rest assured that you do have some options. At the same time, aim to figure out why you wound up with an underpayment in the first place. Maybe you didn't have enough tax withheld from your salary. Or maybe you earned a lot of income from a side job or investments but failed to make estimated payments on it throughout the year. As you attempt to deal with your outstanding tax debt, also do your best to avoid a repeat scenario the following year so you don't dig yourself into an even deeper hole.