There is no doubt about it -- taxes are by far the single largest expense that most Americans pay every year. Even President-elect Joe Biden isn't exempt from large tax bills, paying nearly $300,000 in federal income taxes in 2019. The jury is still out on how President Trump's tax return really looks -- although data from The New York Times suggests that he only paid $750 in federal income taxes for both 2016 and 2017.

Of course, many would love to be in Trump's shoes. But the good thing is that the average American isn't stuck with a six-figure tax bill. The latest data has been released and you might be surprised about the average tax bill and how you compare to others in your income range. 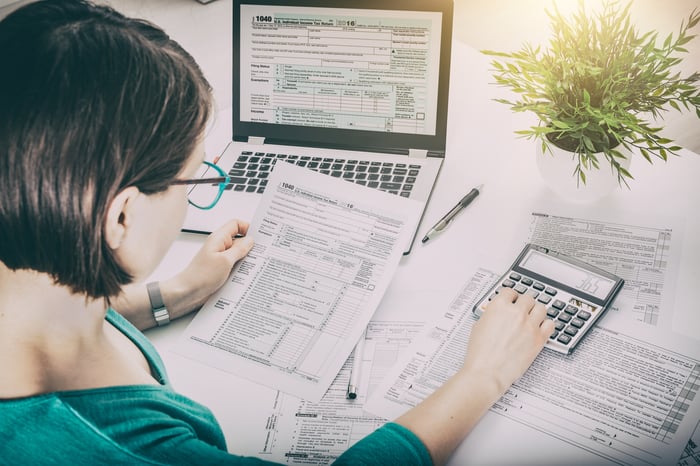 The most recent IRS data revealed that Americans who filed taxable returns paid an average income tax payment of $15,322 in 2018. This number was calculated based on the returns of over 153 million American households who filed during that period, which included just over 100 million taxable returns. Naturally, the average tax payment is a bit skewed given the fact that over 56,000 tax returns were for people with adjusted gross incomes (AGI) over $5 million, representing a seven-figure tax bill for those who are in the top percentage of income earners.

Average tax payments are based on AGI, which basically refers to your total gross income minus a few specific adjustments for items like student loan interest and retirement account contributions.

To get a better idea of the difference in tax payments between low-, moderate-, and high-income earners, take a look at the 2018 tax payments by income level.

Your income impacts your taxes

All income sources are not taxed equally. If you earn income from wages and salary, your tax rate could be as high as 37% if you are at the top end of the income scale. On the other hand, some dividends are taxed at long-term capital gains rates, giving you a chance to unlock the 0%, 15%, or 20% tax bracket based on your income range for the year.

Don't let taxes get you down

You can't escape taxes, so the best thing you can do is learn how to better manage your taxes and understand how the tax code can work in your favor. Fortunately, the IRS has increased income limits for all tax brackets, giving you an opportunity to earn more income without the fear of stepping into another tax bracket.

Since income plays a large role in your taxes, create a strategy that allows you to diversify your income. You can never go wrong when you earn an extra stream of income in the stock market, allowing you to take advantage of favorable capital gains rates if you hold your investments over a year. There's even a chance you'll pay no taxes on your gains if your income is under certain limits.