Getting married changes many aspects of your life. One of them is the tax filing process.

Your marriage can affect your filing status, of course, but also deductions and credits you're eligible for and your tax bracket. This newlywed's guide to taxes will help you understand three of the biggest tax changes that are likely to come from saying "I do." 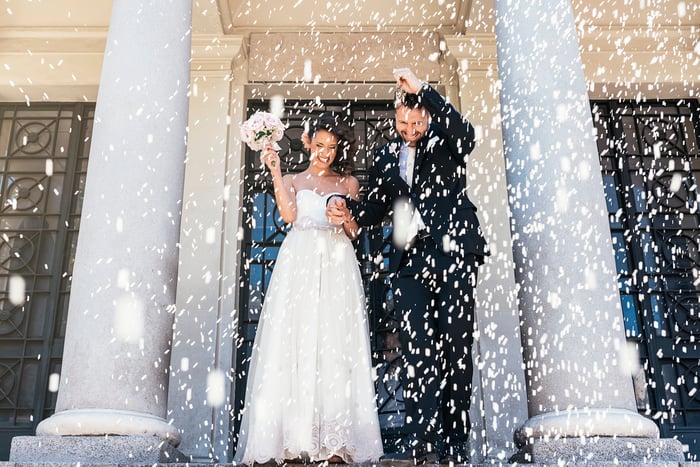 1. Your tax filing status will change

The most obvious change that will result from getting married is that you'll no longer be able to file your taxes as single. Instead, you'll have a choice of two filing statuses: Married filing jointly, or married filing separately.

In most cases, married filing jointly is probably going to be your best bet. Separate filers lose access to a number of different tax breaks, including commonly claimed deductions such as for student loan interest and traditional IRA contributions. There's often no reason to give up these deductions.

However, married filing separately makes sense in limited circumstances, such as if you'd lose your ability to deduct medical expenses by filing jointly, or if you're afraid your spouse might provide dishonest information on a joint return and don't want to share legal responsibility for doing so.

2. Your tax bracket may change

As a newly married couple, your combined income will determine what your tax bracket is.

You won't always change brackets when you get married. If you both earn somewhat comparable salaries, it's less likely to happen. But it is possible -- especially with large income disparities or if one spouse doesn't work at all -- and the change can affect the total amount of tax you owe.

3. Your eligibility for deductions and credits may change

Some deductions and credits are means-tested. Combining your income after marriage can change your eligibility for them.

For example, for those with no children, the earned income tax credit is available for single filers with an adjusted gross income up to $15,980 in 2021. But it's only available to childless married joint filers with an income up to $21,920. If you were previously eligible as a single person but get married and combine your incomes, it's possible you won't be able to claim this credit any more if your joint income is too high.

Likewise, if you are a single filer without access to a workplace retirement plan, you can make deductible contributions to a traditional IRA regardless of how much you earn. But if you get married and your spouse has access to a workplace plan, income limits will apply and potentially curb your ability to claim this deduction.

Losing eligibility for deductions and credits could mean that your tax bill gets bigger once you've tied the knot.

Be prepared for how marriage will affect your taxes

If you're legally married as of Dec. 31, you'll be considered married for the entire year for tax purposes (even if you just got married that day). It's important to understand the implications -- especially if it may mean you end up owing more money to the IRS. These are the three biggest changes to know about, but it's probably a good idea to do your taxes early to avoid any other surprises after this major life change.