Being a contractor has its perks, but also some drawbacks. Here are some things you need to know.

Ask anyone who's been in the workforce long enough, and you'll learn that job security can be a tricky thing to come by. Sure, it might be relatively easy to hold down a job during a booming, or even moderate, economy, but the moment things turn sour, you could easily be out of luck. Such was the case during the Great Recession of 2008-2009, in which a whopping 8.7 million jobs were lost.

Given the somewhat precarious nature of employment, you'd think more people would be itching to snag the highest dose of job security possible. But instead, a growing number of workers are passing up opportunities to become full-time employees and are instead going the contractor route. 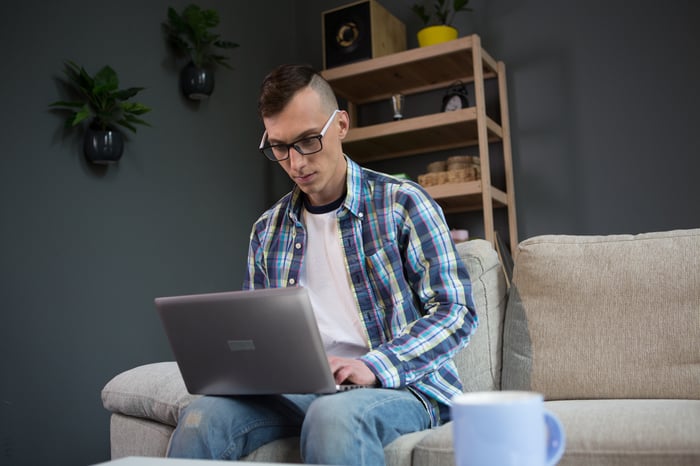 And it's not just millennials who prefer the contractor lifestyle. A surprising 63% of full-time executives say they'd switch to contractor status if given the opportunity, according to a new report by Mavenlink. And while those same people admit that job security is the primary factor holding them back, it may not be as large an issue as expected.

Contractors are taking the economy by storm

Being a contractor isn't the anomaly it once was. Contractors now make up 34% of the workforce, and that percentage is likely to climb over time – especially since 94% of business leaders plan to continue using, or increase their usage of, skilled contractors for specialized roles over the next 12 months.

How did contractors get so popular? Part of it boils down to the fact that they're frequently easier to hire. In fact, 77% of business professionals say that it's easier to get approval to add contractors to their teams than to bring in full-time, permanent employees. Similarly, contractors are also easier to fire when the need to retain them begins to wane. Whereas it's common practice to grant full-timers some sort of severance package upon termination, contractors can often be let go at a moment's notice, and without the need to offer up any form of consolatory compensation. Also, because contractors aren't eligible for benefits, they're often cheaper to employ than full-time or permanent workers.

Clearly, there are plenty of good reasons for companies to turn to contractors to fulfill their needs. But the question remains: Is it really advantageous to go from full-time worker to contractor?

Though working as a contractor has its benefits, it also has its share of downsides. First, the positive. As a contractor, you can create your own schedule and work from home or the location of your choice. Want to take vacation? No need to get approval from a manager -- just tell your clients when you'll be gone, and enjoy your time away. Contractors also have the ability to claim business deductions, and if you're savvy in this regard, you can reduce your taxable income and shield more of your money from the IRS.

On the other hand, taxes are also one of the greatest drawbacks of being a contractor. That's because contractors are required to pay self-employment taxes, and shell out twice as much for Social Security as permanent, full-time employees. Not only that, but as a contractor, the burden is on you to figure out how much estimated tax to pay the IRS during the year. Get it wrong, and you may be hit with costly underpayment penalties.

Then there's job security, which we talked about earlier. Contractors are often (though not always) the first to be let go in a downsizing or restructuring situation, and unless you have a series of solid contracts in place, you may also be subjected to considerable fluctuations in income. This can make budgeting and financial planning a major challenge.

Finally, as a contractor, you don't get any workplace benefits, which means you'll have to pay for things like health insurance yourself. And while you're free to take vacation as you see fit, you won't actually get paid for the days you're not working.

Still, it's pretty clear that a large number of permanent employees are eager to experience the contractor lifestyle. If you're one of them, just be sure to have a financial safety net in place before you take the plunge. Until you've secured a steady stream of work, you'll likely see a drop in income. Also, talk to some people who have been doing the contractor thing for a bit, and get some insight on what it's really like to work for yourself. Being a contractor might seem like the ideal job situation, but you know what they say -- the grass is always greener on the other side of the employment status line.