Please ensure Javascript is enabled for purposes of website accessibility
Log In Help Join The Motley Fool
Free Article Join Over 1 Million Premium Members And Get More In-Depth Stock Guidance and Research
By Maurie Backman - Oct 9, 2017 at 6:18AM

Time to air some grievances? Here's how to pull off that awkward but necessary conversation.

It's a situation no one wants to be in. You have a job that you generally like, with coworkers who are smart and supportive. You're even at peace with your compensation (though you'd of course love to be earning more). There's just one glaring problem: Your boss is an awful human being to work for, and you've reached the point where you're tempted to leave an otherwise good job out of sheer desperation.

Dealing with a bad boss is never easy, but before you start planning your escape, you may want to consider an alternate solution: airing your grievances in an attempt to make things manageable. While it isn't an easy feat to pull off, there are ways to approach this sort of conversation without anger or confrontation. If you're brave enough to hash things out with your boss, here's how to have that discussion. 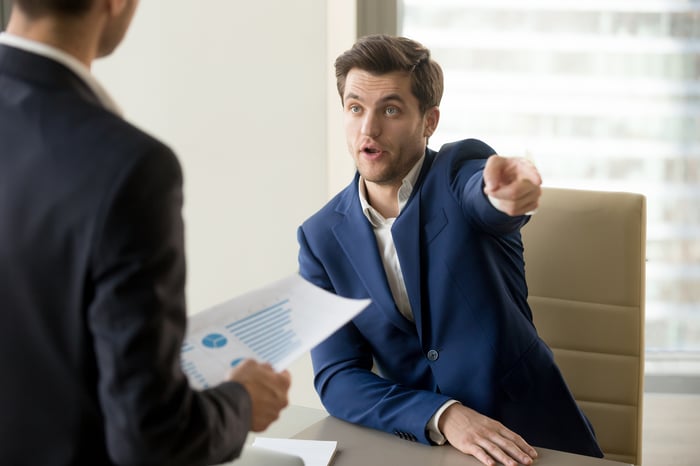 1. Write down your thoughts ahead of time

Nobody enjoys being on the receiving end of criticism. Throw in the fact that you're critiquing your superior, and it could be a recipe for disaster. That's why it's critical to map out what you plan to say ahead of time and practice your speech so you're not jumbling your thoughts on the spot.

2. Ease into the conversation, but don't go overboard

It's hard to say how your boss might react when you sit down and start criticizing him or her, so it pays to start that conversation on a positive note and get their defenses down. You might begin by thanking your boss for taking the time to meet with you, acknowledging their mentorship, or showing your appreciation for their most recent round of feedback on your work. That said, don't spend too much time buttering your boss up, or you'll come off as insincere once you get into the meat of the conversation.

Even if your boss is a horrible jerk with a miserable attitude, you'll need to do your best to discuss his or her actions rather than his or her personality. Say your boss constantly puts you down in meetings or shoots down your ideas before you really get a chance to present them. Rather than say something like "You're close-minded and insulting," say, "It seems like I never get a chance to speak my mind."

While you might firmly believe that your boss is the source of conflict in your relationship, if you're going to confront him or her, aim to own the burden to the greatest extent possible. Say your boss has a tendency to dump things on you at the last minute. You might say, "I get frustrated when I'm not given ample time to get things done," rather than "You never give me enough time to complete projects." The former is far less accusatory, yet it conveys a similar message.

5. Propose a plan for moving forward

Unless there's the possibility of transferring to another team, if you're hoping to stay at your job, then you and your boss will need to learn to coexist. That's why it's crucial to close out that conversation with some concrete ideas for improving your relationship (ideas which, incidentally, you'll want to think up ahead of time and propose when appropriate). For example, if your boss constantly yells and loses patience with you, try suggesting that he or she give you times when they'd prefer to be approached with questions. You can even make it clear that you're looking to be as unobtrusive as possible and that you're willing to time your inquiries to best suit their schedule. Or, if your boss frequently bashes your work without offering suggestions on how to improve it, ask them to, at their convenience, provide a sample of how they'd like things done so that you can strive to emulate it.

Of course, if -- despite your best efforts -- you're unable to change your boss's behavior, you may have no choice but to resign from your position and seek out a role where you won't face the same sort of abuse. But if you like your job, it pays to have that important (albeit uncomfortable) conversation before calling it quits. You never know what might prompt your boss to change their ways, and if that happens, you'll have a much better work experience to look forward to.