Please ensure Javascript is enabled for purposes of website accessibility
Log In Help Join The Motley Fool
Free Article Join Over 1 Million Premium Members And Get More In-Depth Stock Guidance and Research
By Maurie Backman – Apr 3, 2018 at 8:03AM

There's nothing wrong with speaking your mind at the office, whether it's to suggest ways to improve an existing process or share useful data you've unearthed. At the same time, there are certain work scenarios where it pays to stay quiet and keep your thoughts to yourself. Here are just a few.

1. When your two bosses are arguing

Having multiple bosses isn't an easy situation to be in, especially when your managers tend to butt heads. But if you find yourself in the room when your bosses are fighting, it's crucial that you stay out of it and avoid taking sides -- even if asked. Rather, back away, or state point-blank that you'd rather not get involved. It's better than sharing your opinion and perhaps alienating a manager. 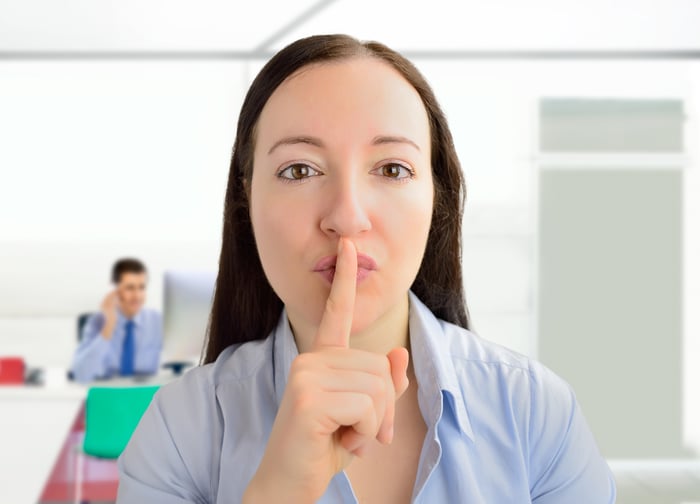 2. When your know-it-all colleagues are making their case

Many of us have those co-workers who drives us crazy by constantly showing off and insisting they're right all the time. But there's little sense in interjecting when those colleagues are making a speech or sharing their naturally brilliant insights in a public forum. Even if you know what they're saying isn't correct, chances are, your words will fall on deaf ears anyway. You're better off following up with a diplomatic email stating your case so you don't incur their anger.

3. When your co-workers are gossiping

Gossip is a part of many workplaces, but you'd be wise to avoid it. You never know what information might land in the wrong hands, and the last thing you want is to get a reputation as someone who talks about others for fun. So keep things professional, and if you happen upon a conversation where some colleagues are trashing another, walk away or, at the very least, stay silent.

4. When you're looking to complain in public

Perhaps your boss sprang a last-minute project on you right before a holiday weekend. Or maybe you're dealing with a series of deadlines that just aren't reasonable. No matter the specifics, it's crucial that you resist the urge to complain in front of your boss or colleagues. Doing so will only make you seem petty and negative. Instead, calmly sit down with your manager and ask to discuss the matter professionally -- without whining.

5. When you've received a job offer -- but haven't yet said yes

If you've been looking for a new job on the sly, landing an offer can feel like a huge accomplishment. And while it's natural to want to celebrate that offer with your colleagues, you're better off keeping the news under wraps until you decide to resign officially. The last thing you want is for your manager to hear about that offer through the grapevine and retaliate by firing you on the spot when you haven't actually made up your mind about moving on.

6. When you're being appropriately criticized by your manager

Maybe you failed to meet expectations on a particular project, or circulated a report with avoidable errors. If your bosses attempt to provide constructive feedback, don't argue as they try to speak. Rather, sit back and listen to what they have to say, difficult as it may be. Showing that you're able to accept constructive criticism is a good way to send the message that you've matured professionally, so stay quiet, and keep an open mind.

Knowing when not to speak can help you get ahead in the workplace. Keep your mouth shut in these tricky scenarios, and you'll avoid unnecessary trouble.