Please ensure Javascript is enabled for purposes of website accessibility
Log In Help Join The Motley Fool
Free Article Join Over 1 Million Premium Members And Get More In-Depth Stock Guidance and Research
By Maurie Backman – Apr 17, 2018 at 8:33AM

It's good to ask questions during a job interview -- as long as you choose the right ones.

Congratulations -- you've made it to the interview stage of the job application process, which means the company that's invited you in clearly thinks you're a viable candidate. Now all you need to do is rock that conversation and convince that business to extend an offer.

In the course of that interview, you'll probably be asked if you have any questions -- and you should most definitely come in with a few. That said, there are certain things you should avoid asking in an interview if you want to increase your chances of getting hired. Here are a few questions to stay away from. 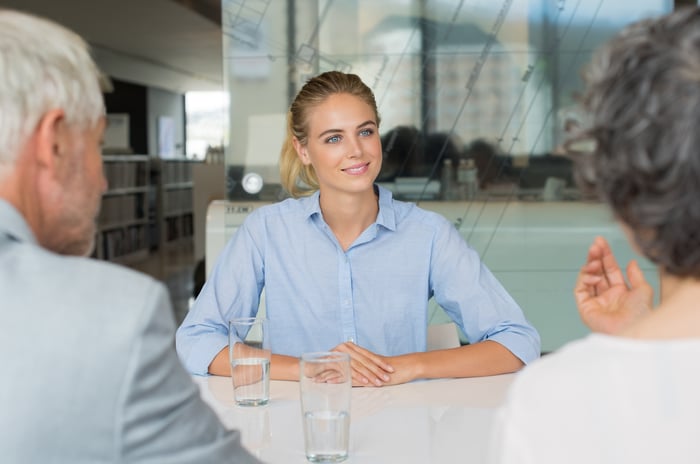 It's natural to want to know what a job pays before getting too excited about it. But a job interview isn't the forum for that question. It's generally considered inappropriate to bring up salary until an actual offer is presented to you, so bite your tongue and hold off on inquiring about money. Along these lines, don't press for details on employee benefits before an offer is made. Asking about health insurance and 401(k) matches means getting way ahead of yourself, which might easily turn your interviewer off.

2. How soon can I get promoted?

When you're looking for work, the last thing you want to do is somehow wind up in a dead-end job. That said, it's not a good idea to ask about getting promoted during an interview, because in doing so, you might come across as overly presumptuous. If you want to vet the role to ensure that it offers adequate room for growth, ask your interviewer to delve into what it entails -- but don't make it seem like your only goal is to quickly climb the ranks.

These days, telecommuting is becoming more popular among companies large and small. And while the company you're interviewing with may very well be open to it, it's not the best idea to ask about it until the employer in question makes an offer. Remember, working from home is generally considered a privilege that employees need to earn. To expect an answer before you've gotten a chance to prove yourself is therefore a bit unreasonable.

Whether it's your child's weekly dance recital or your volunteer group meetings, you might have a pressing reason to ask for some flexibility in your schedule, even early on. But as is the case with salary-related inquiries and work-from-home arrangements, an initial interview isn't the time to request flexibility for a job you don't even have yet.

Furthermore, in asking for the option to leave early, you might inadvertently reveal details about your personal life that work against you. For example, if you need to leave early on occasion to pick up a child, and your interviewer tends to discriminate against parents versus candidates without children, you could end up hurting your chances of getting hired. A better bet? Save that question for when an offer is presented.

Questions you should ask during an interview

Though the above inquiries are ones you should avoid during an initial job interview, there are certain questions it definitely pays to ask early on, such as:

All of these questions are not only reasonable, but send the message that you're genuinely interested in learning more about the business.

As a job candidate, it's on you to make a good first impression during an interview. Knowing what questions to avoid will help you do just that.