We're told time and time again that we shouldn't hesitate to ask for more money at work when we feel we're underpaid. But what happens when you muster up the courage to request a raise, only to have it denied? It's a demoralizing situation, and one that can leave a very bad taste in your mouth. Here's what to do when you ask for more money and your boss says no.

Maybe your company is dealing with budgetary constraints. Or maybe your manager feels that your salary is reasonable given your level of experience. No matter the details, once your request for a raise is denied, you have every right to politely ask your boss to explain that rationale. Understanding why you were denied can, in many cases, give you something to work with so that you're more successful on your next go-round. 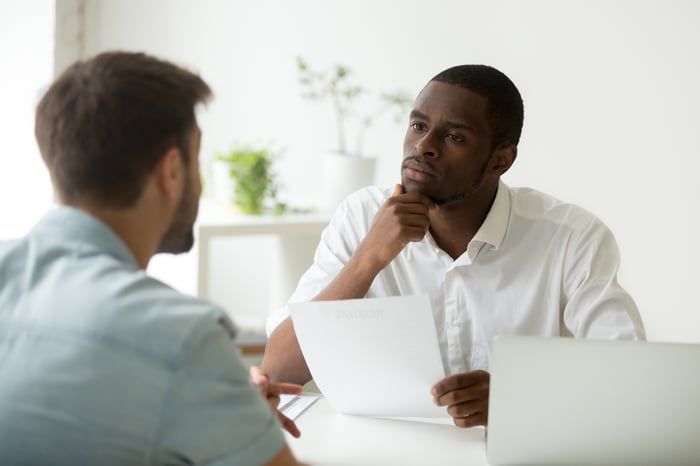 For example, say you're denied a raise because you're lacking key skills that your boss feels someone in your role should have to command top dollar. If that's the case, you can work on boosting those skills over the next few months so you're better positioned to ask for more money down the line.

2. Ask to revisit the issue in six months

Your manager might have a reasonable explanation for denying your raise -- but that doesn't mean you should put the matter to rest. Instead, tell your boss that while you accept the decision at hand, you'd also like to keep the conversation going at a later point in time. This sends the message that you're not just going to let it go. At the same time, it also shows that you're handling the situation maturely and respectfully.

3. Negotiate perks other than money

Maybe your company is going through some financial issues and has no wiggle room for increasing employee salaries. Or maybe your boss just can't justify a bump in salary given that you're earning a reasonable sum based on the market at present. If there's no immediate way to get more money out of your company, try seeing if you can negotiate other benefits instead.

You might, for example, ask to work from home twice a week in lieu of a salary boost. This way, your company doesn't have to spend more money, but you'll effectively get more money by virtue of not having to pay to commute all the time. Or, you might ask for a few more vacation days, which won't necessarily put more money in your pocket (unless you spend that time working a side hustle), but will give you a prime opportunity to recharge.

Of course, if being denied a raise really doesn't sit well with you, there's always the option to look for a new role at a different company -- one that might come with a higher base salary. But if you're invested in staying put, know that you don't have to sit back and simply take no for an answer.

Denied a Raise? What to Do Next @themotleyfool #stocks Next Article
Current