Please ensure Javascript is enabled for purposes of website accessibility
Log In Help Join The Motley Fool
Free Article Join Over 1 Million Premium Members And Get More In-Depth Stock Guidance and Research
By Maurie Backman – Feb 9, 2019 at 10:36AM

For many workers, commuting is a part of life. And while there are benefits to commuting, like getting a chance to clear our heads before and after work, those of us who are forced to spend hours each week in a car, or on a bus or train, would most likely appreciate having that time back.

In fact, 57% of workers say they'd get more sleep if their commutes were shorter, according to a survey conducted by The Best Mattress. Seeing as how the overwhelming majority of working Americans don't get enough sleep to begin with, that sentiment makes sense.

Meanwhile, 47% of people say that if their commutes were shorter, they'd spend more time getting ready for the day, while 31% say they'd manage to actually eat breakfast. And 22% claim that a shorter commute would translate into more time to exercise. 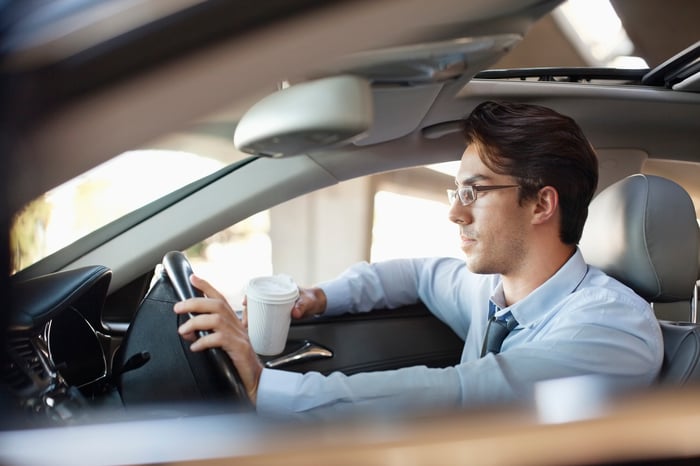 No matter what you'd do with the time saved by a shorter commute, know that spending less time in transit could result in a better work-life balance. It might also reduce your stress level and change the way you view your job. And that's why it pays to shorten your commute -- not by moving, but by working from home, at least on a part-time basis.

The case for telecommuting

Some jobs can't be done remotely, but if yours can, then it pays to speak to your manager about working from home, at least on a partial basis. Not only will this give you more flexibility, but it could free up multiple hours each week for you to tend to other important items.

Imagine, for example, that you typically rise at 6:00AM to grapple with an hour-long commute into work. Doing your job from home twice a week might enable you to approach those workdays from a more well-rested standpoint, thereby improving your productivity. Having the time to eat a proper meals and exercise is also important to your health -- and the healthier you are, the less job-related interruptions you'll face when you're inevitably forced to call out sick.

How do you convince your manager to let you work from home? First, talk up your track record. If you're a seasoned employee who's historically worked independently at the office without much oversight, then there's no reason to assume you wouldn't do the same solid job from home. You might also pledge to split your saved commuting time between work and personal matters so that you and your company win. For example, if you're typically unavailable to respond to follow-up calls or emails because you're on a packed train for an hour after work lets out, you can tell your boss that on the days you're allowed to work from home, you'll stay at your desk 30 minutes longer and remain available.

Of course, if you don't mind working from home on a full-time basis, you might try making that case, too. That, however, might be a harder sell, especially if your manager is used to having you around. Still, gaining back even a few hours from not having to commute as much could work wonders for your schedule, health, and state of mind, so it pays to argue for as much of a break as you're able to snag.