Please ensure Javascript is enabled for purposes of website accessibility
Log In Help Join The Motley Fool
Free Article Join Over 1 Million Premium Members And Get More In-Depth Stock Guidance and Research
By Maurie Backman – May 2, 2019 at 7:18AM

Driving to the office daily can be a drag. Here's how to ease the pain.

For many Americans, commuting is a part of life, and while getting to and from work via public transportation isn't always a picnic (think cramped buses, rail delays, or other such unpleasantries), for some people, there's nothing more loathsome than having to drive to the office. In fact, 68% of Americans who drive to work say that their whole day could effectively be ruined by a bad commute, according to a study by OnePoll on behalf of Valvoline.com. And given that one-fourth of the average commute is spent in traffic, that's not an unlikely scenario.

Of course, no one likes dealing with hiccups on the road, but in some cases, they can actually make you look bad at work. Case in point: Americans who drive to work end up being late 77 days a year, on average. 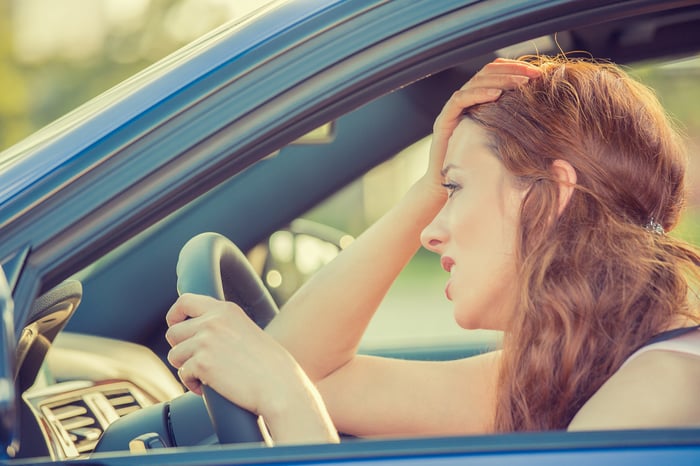 If your drive to work has been getting you down, it's time to address the problem before it renders you totally miserable. Here are a few tactics to try out.

1. Come up with a productive or fulfilling way to maximize that time

The problem with being trapped in traffic is that it not only puts you at risk of arriving to work late, but it also makes you feel like you're wasting precious minutes you can't get back. That's why it's important to come up with a means of entertaining yourself or getting work done on the road. This doesn't mean you should plan on answering emails while stopped in traffic, because frankly, that's neither safe nor smart. What you can do, however, is play some podcasts you enjoy, listen to an audiobook, or, if possible, make work-related calls from the road so you have one less thing to worry about while you're at the office. This way, you may not feel quite so frustrated about being stuck at the same mile marker for a while.

Most workers commute during rush hour (hence the name), but doing so exposes you to traffic and delays. A better bet, therefore, is to see if you can alter your work schedule so as to avoid those peak congestion periods. If your employer is willing to be flexible, you might start your day an hour or so earlier than most so that you're heading to the office before the crowds hit the streets and you're leaving before most people get out. Or try the opposite -- come in later but stay late so that by the time you get back on the road, most of the traffic is gone.

3. Explore alternate routes to your office

Maybe there's a convenient higher-speed roadway that leads directly to your office. That's all fine and good, but if that roadway is so popular that it's generally clogged when you're on it, it might pay to look at different ways to get to work. Taking side streets or back roads, for example, might lengthen your commute mileage-wise, but if there's no traffic to contend with, it could get you to the office more quickly.

There's nothing like an automobile malfunction to turn an otherwise decent trip to work into a terrible one. To avoid such issues, be sure to keep up with your vehicle's maintenance, and if you start your car and sense trouble, ask to work from home before running the risk that you'll get stuck on the side of the road for hours on end.

5. Look into public transportation if driving is a nightmare

If, despite your best efforts to make your drive to work more tolerable, you find that you still hate doing it on a daily basis, you might consider taking public transportation instead. The benefit of not being the driver is that you'll have more options for how you use your commuting time, whether it's reading, working on spreadsheets, or simply shutting your eyes for a little added rest.

If your drive to and from work has been getting you down, don't just settle for a lousy commute. Instead, take steps to change it -- before a few bad trips drive you to up and quit.