Please ensure Javascript is enabled for purposes of website accessibility
Log In Help Join The Motley Fool
Free Article Join Over 1 Million Premium Members And Get More In-Depth Stock Guidance and Research
By Maurie Backman – Updated May 3, 2019 at 2:44PM

Most people would give anything to do their jobs from home. But if you're not careful, that arrangement could take a serious toll on your mental and physical well-being.

For many people, working from home is a dream situation. After all, when you work from home, you don't have to waste time commuting, or pay to get an office. Further, it means being home to tend to personal matters during the day, whether it's accepting deliveries, letting in repair people, or having the option of tossing in some laundry while simultaneously chatting on conference calls.

But despite the obvious benefits, if you're not careful, working from home could wind up being harmful to your health. Here are three pitfalls you might encounter. 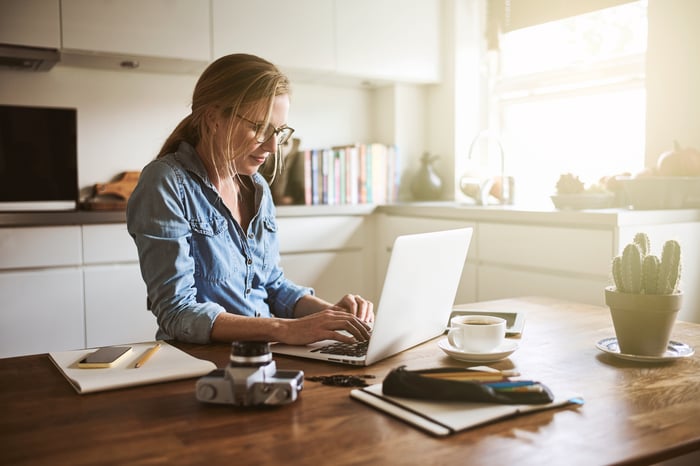 The good thing about commuting is that it forces you to move in some shape or form, whether it's walking a few blocks to the train station or even crossing the parking lot by foot after parking your car. The problem with working from home is that you lose that forced exercise.

Furthermore, when you work in an office and have meetings, you usually need to get up several times a day and head to different conference rooms. When you dial into meetings from home, on the other hand, there's no need to leave your chair.

To avoid getting too dragged down by all of that inactivity, schedule breaks where you force yourself to walk around for a few minutes here and there. Better yet, if you're on conference calls that don't require you to be staring at a screen, use those as opportunities to get moving, whether it's strolling outdoors (if the weather cooperates and your street is quiet enough) or pacing around your living room.

When you work in an office, you generally need to either pack food in advance or make an effort to leave the building to get lunch or snacks. As such, you're more likely to be mindful of what you're preparing or purchasing. When you work from home, on the other hand, it's easier to overeat with a fully stocked kitchen at your disposal.

To avoid putting on weight, prepare your daily meals and snacks in advance, just as you would if you were working in an office, and pledge to eat only those items during the workday. Another way to curb the munchies? Drink lots of water. You can invest in a large reusable bottle and keep it at your desk so you're not constantly running to the kitchen for refills, thereby putting yourself in closer proximity to the food you're supposed to be staying away from.

The nice thing about having officemates is the instant companionship you get during the day. Working from home, on the other hand, might lead to feelings of loneliness, thereby impacting your mental health. This especially holds true if you're a social person by nature.

To avoid that happening, make a point of scheduling at least one phone or video meeting a day, if possible. This way, you're guaranteed a degree of human interaction to break up the monotony of working solo. You can also consider working from a nearby coffee shop instead of your home if doing so won't kill your concentration. Just being around other people should help you feel less isolated, even if they're people you don't actually know or work with.

The ability to work from home is generally considered a perk, but if you're not careful, you might end up regretting the decision to telecommute. On the other hand, if you're mindful of the aforementioned drawbacks, you can take steps to avoid that arrangement taking a negative toll on your health.