What: Shares of Computer Sciences (NYSE:CSC) rose 48.5% in May 2016, according to data from S&P Global Market Intelligence. The surge boils down to a dramatic turn of events on May 24, when the company announced that it would merge with the enterprise services division of Hewlett-Packard Enterprise (NYSE:HPE).

So what: The pending merger between these two giants of the enterprise computing services business is expected to close in the spring of 2017, with shareholders of each company taking roughly 50% ownership of the new business.

Computer Sciences brings about 70,000 employees to the combination, while Hewlett-Packard Enterprise sends in roughly 100,000 workers. Computer Sciences CEO Mike Lawrie is taking the CEO and chairman titles for the new structure, while Hewlett-Packard Enterprise CEO Meg Whitman will settle for a board seat. The two revenue streams are said to overlap by less than 15%.

Both stocks rose sharply on the news, but Computer Sciences soared much higher than its soon-to-be partner. 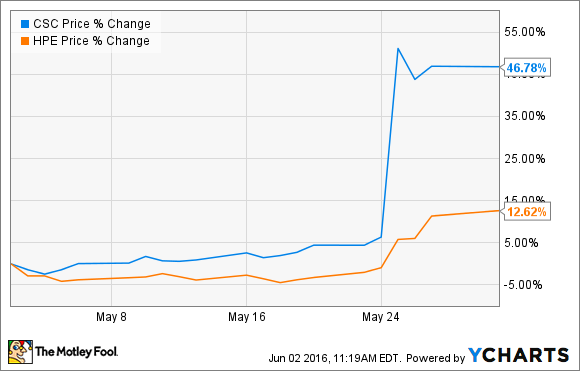 Now what: This merger brings significant economies of scale to a business that could use some of that action. Computer Sciences' profit margins have been unpredictable in recent years, and sales are on the decline in 2016.

Lawrie calls this deal "the logical next step" in his company's transformation. Computer Sciences has been doing plenty of small plug-in acquisitions recently, hoping to find synergies to spark renewed sales growth. Weaving the company together with Hewlett-Packard Enterprise will certainly help. Together, the merging operations should notch something like $26 billion in annual revenues. That's among the largest revenue streams in the IT services industry, just a hair behind market leader Accenture (NYSE:ACN) at $31.6 billion.

The companies have worked together for decades, and the merger should bring very few culture shocks. Now it's up to Lawrie to make the most of this sharp turn. For the first time, Computer Sciences will now be able to cross-sell its service contracts with high-quality software and hardware from HP's portfolio.