Twenty months ago, Goldman Sachs made the controversial decision to recommend buying Delphi Automotive (NYSE:DLPH) to its clients. "The company's leverage to secular growth areas of active safety, fuel economy, and connectivity within the auto industry," said Goldman, made the stock a buy. With strong free cash flow powering acquisitions and stock buybacks alike, Goldman predicted the stock would go to $82.

And what has happened since? Well, at first, Goldman was right! Car sales surged, Delphi stock hit $82 -- then shot past it. Goldman Sachs doubled down and put the stock on its conviction buy list. But last week, Ford Motor (NYSE:F) announced a 6% decline in May car sales. Toyota's (NYSE:TM) sales tumbled 10%. General Motors (NYSE:GM) sales "plummeted" 18%. And as for Delphi, its stock is down 23% over the past 52 weeks. 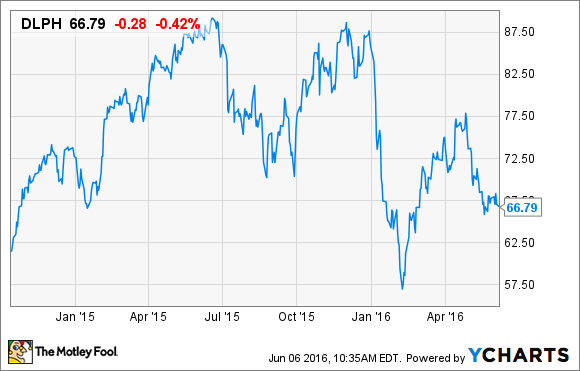 So this morning, Goldman dumped it.

Lamenting "the choppier start of the year for monthly US auto sales pace combined with investor positioning" (or rather, repositioning -- away from the auto sector), Goldman Sachs announced today that it's removing its conviction buy rating from Delphi stock. Here are three things you need to know about the new rating.

First and foremost, you need to know that while Goldman Sachs has downgraded Delphi stock, the analyst still loves it. "We continue to believe in the company's secular content growth opportunity," writes Goldman in a report covered by StreetInsider.com this morning.

More specifically, while Goldman has less "conviction" about Delphi stock, it still rates the stock a buy and hangs a $94 price target on it -- which, if proved correct, would work out to about a 40% profit for new buyers today, plus another 1.7% from the dividend.

Judging from the latest sales numbers at Ford, Toyota, and General Motors, the auto market may well have just turned. It may have peaked, and the automakers may have to get used to selling fewer cars from here on out. That's not necessarily a deal-breaker for Delphi stock, however, because as Goldman points out, what's key to Delphi is not just how many cars its customers sell, but how much of Delphi's own products go into those cars.

So long as Delphi's product share keeps growing, and Delphi keeps grabbing market share within all cars, Goldman thinks the stock can keep going up.

Thing No. 3: What's going on with that market share, anyway?

So is Delphi gaining market share? As a matter of fact, it is. Here's how you can tell: According to data from CSI Market, Delphi grew its revenue by 6.7% last quarter. At the same time, notes CSI, "most of its competitors have experienced contraction in revenues." In fact, revenue growth in the auto parts industry averaged negative 4.7% last quarter.

If Delphi's revenue is growing, while its competitors' revenues are shrinking it's a mathematical certainty that Delphi is gaining market share.

The final thing -- and the most important thing

So that means Goldman Sachs is right to recommend Delphi, right? Maybe.

Goldman is clearly right in its overarching thesis, that Delphi is beating the competition, and gaining market share. Additionally, Delphi stock really looks cheap at today's prices. It costs only at 11.4 times earnings, and is pegged for 15.5% long-term earnings growth by analysts polled on S&P Global Market Intelligence. That's less than a 0.75 PEG ratio, before you even consider the effect of the 1.7% dividend yield.

That said, the P/E ratios at Ford, Toyota, and GM are even cheaper than Delphi's, and all three of these auto majors sport respectable growth rates, and far superior dividend yields. Even if Delphi's stock is a bargain -- and it is -- its customers' stocks may be even better bargains.