Please ensure Javascript is enabled for purposes of website accessibility
Log In Help Join The Motley Fool
Free Article Join Over 1 Million Premium Members And Get More In-Depth Stock Guidance and Research
By Andrew Tonner - Jun 10, 2016 at 7:32AM

With an IPO for the streaming music service inevitable in the next couple of years -- and with competition increasing -- investors are rightly wondering how it generates its revenues, and if it can earn a profit.

Given the "strict" terms that came with its recent $8.5 billion  valuation, the clock is officially ticking for a Spotify IPO.

With its public offering a virtual certainty in the next 24 months, the Swedish streaming upstart will focus on revenue growth to eventually become profitable.

So with Spotify destined to go public sooner rather than later, it makes sense to quickly review how Spotify makes money in a niche where competition from Apple (AAPL -2.98%) Music, Pandora (P), and others looms large.

Like most content platforms, Spotify makes money in two primary ways: advertisements and subscriptions. As it remains privately held, its finances aren't open to the public. However, documents the company files in Luxembourg give some visibility into the matter.

As reported by Music Business Worldwide, Spotify's sales continued to soar in 2015, though profits remain a work in progress. Here's a quick overview of Spotify's finances over the past three years. 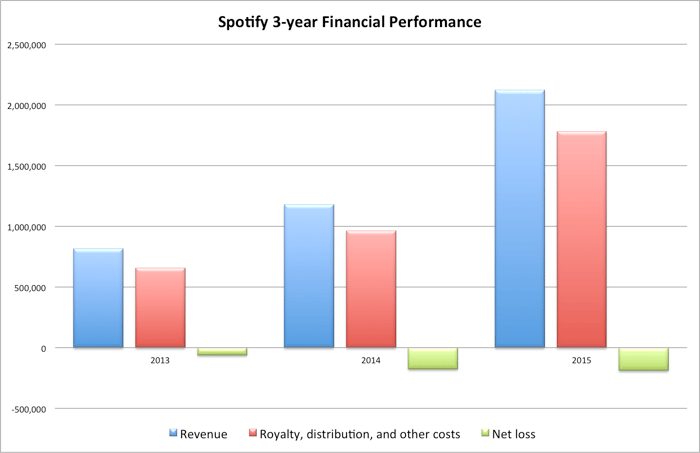 Persistent losses like this don't necessarily inspire a lot of faith, especially when a requisite input like royalties consumes a meaningful percentage of Spotify's sales. The company's experiences chasing elusive profits largely mirrors those of rival Pandora, which has consistently struggled to make money throughout its existence as a public company.

If it is to stand a chance of ever reaching profitability, Spotify will need to find a way to meaningfully grow its base of paying subscribers. Leaning once more on the Music Business Worldwide numbers, we see that paying users account for a hugely disproportionate share of Spotify's revenue last year, as you can see below.

It's worth first noting that these numbers are from the end of 2015, and we know that Spotify's user and subscriber figures have changed in the interim. However, the overarching truth likely remains intact -- namely, that growing its paid subscribers is the strategy toward profitability. The success of Spotify's IPO could depend on its ability to convince investors it indeed has a pathway to profitability.

The competition heats up

As we learned from the most recent Recording Artists of America (RIAA) report, streaming is the primary growth vertical in music today, and Spotify's competition is fast at work strengthening their respective products.

This "land grab" scenario places an increased burden on Spotify. Not only must it find a tenable road map to long-term profitability, it must also do so amid increasingly competitive circumstances.

Apple is reportedly planning to refresh Apple Music in time for a launch at the upcoming WWDC. Numerous reports suggested frictions between Apple and Beats employees had compromised the quality of the original Apple Music product. The forthcoming offering promises to better marry Apple's on-demand streaming, radio, and paid music features.

Pandora, which purchased streaming tech from the now-defunct Rdio last November, is also widely expected to debut an on-demand streaming product at some point this year. With activist hedge fund Corvex Management having recently disclosed a large stake in Pandora, the pressure is on Spotify to produce results in short order. There's also competition from the likes of Alphabet (in the form of its YouTube Red subscription service) and the celebrity-backed Tidal.

The implication here is that as Spotify continues to push toward an IPO, it must also continue to grow its user base. The company's efforts to turn a profit will certainly prove an interesting and increasingly important storyline for the music industry's most popular streaming service.