On May 24, ace stock analyst Stifel Nicolaus announced it had downgraded the stock of defense contractor Huntington Ingalls (NYSE:HII) to sell. Investors took a few minutes to get over the initial shock -- then proceeded to bid Huntington Ingalls stock up, and up (and up)! 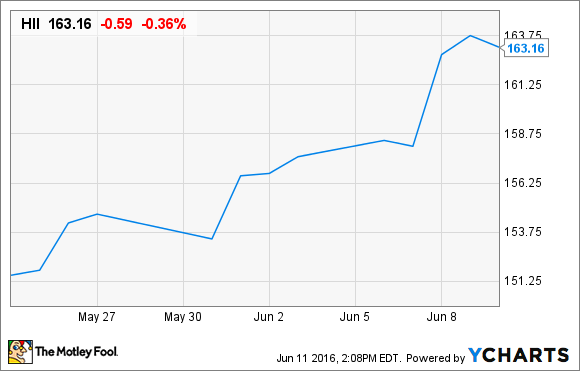 On Monday, three weeks after Stifel made its calamitous call, Huntington Ingalls stock sits north of $163 per share, a full $12, or 8%, higher than where the stock traded at close of trading on the day of the downgrade. Why?

When Stifel downgraded  Huntington Ingalls stock, it cited two primary concerns: first, that there is "execution risk" in the company's Ford-class aircraft carrier program; and second, that the stock costs too much. Let's take those one at a time.

As regards the Ford-class, Huntington has noted that "challenges in the test program ... resulted in a delay of builder's trials" on USS Gerald R. Ford (CVN 78), but "the ship will go to sea this summer, and we are targeting a delivery in September or so." Failure to deliver the aircraft carrier when planned could cause Huntington Ingalls to miss revenue estimates in the second quarter. But Huntington management thinks it has the problems in hand, and so long as no new problems surface, the revenues will eventually arrive, and probably in time for Huntington Ingalls to hit its revenue estimates for the full fiscal year, if not for Q2.

Now, as for the stock costing too much, that's a bit more complicated.

Huntington Ingalls stock currently costs $163 per share. According to a write-up on TheFly.com, however, Stifel says the stock is worth no more than $135. Here's how the logic goes:

According to Stifel, "bulls" like Huntington Ingalls stock for its low P/E ratio relative to other defense contractors, and for its strong free cash flow. Valued on P/E, the stock costs only 17.3 times earnings, below the defense industry average of 18.5. But according to data from S&P Global Market Intelligence, Huntington generated about 50% more free cash flow over the past year than showed up as "net earnings" on its income statement. Thus, when valued on free cash flow, Huntington Ingalls costs only 11.5 times FCF.

Stifel is both wrong and right about that.

Stifel Nicolaus is also right about Huntington's likely decline in earnings and free cash flow. While sales seem to be holding up pretty well, Huntington Ingalls management has gone out of its way to warn investors that its profit margins are likely to dip in the near future, and will probably average only 9% to 10% over the long term. That translates to between 12% and 21% less profit per revenue dollar going forward. So even if revenues grow slightly, profits and free cash flow seem destined to decline.

Parting shot -- and the upshot for investors

There's just one thing that Stifel did not mention -- that I will: Historically, growing, profitable defense firms tend to circle around a price-to-sales ratio of 1.0. Huntington Ingalls once traded below this price -- back when I profiled it as a top pick among defense stocks last summer. Today, however, the stock sells for an above-average price-to-sales ratio of 1.1.

Long story short: Although it's priced cheaply on both a P/E and a P/FCF basis, Huntington Ingalls looks like less of a bargain when valued on P/S. Even if Stifel Nicolaus's other criticisms haven't convinced you yet, this last fact should be setting off alarm bells.