The defense industry seems to contain too many stocks to watch each carefully -- but what if they all add up to just one big industrial "complex"?

"In the councils of government, we must guard against the acquisition
of unwarranted influence, whether sought or unsought, by the
military-industrial complex. ... Only an alert and knowledgeable citizenry
can compel the proper meshing of the huge industrial and military machinery
of defense with our peaceful methods and goals, so that security and liberty
may prosper together."
--President Eisenhower

If you live in America today, you can't not be familiar with first General then President Eisenhower's famous "military-industrial complex speech" (actually his farewell address). Intended as a warning to taxpayers to beware of too-close ties between the Pentagon and the companies that serve it, the speech also contains an observation that could be invaluable to investors in defense companies.

Simply put: The defense industry may look like it's made up of individual companies -- but it's really just one big "complex."

(Side note: If you were looking for "safer stocks" -- aka defensive stocks --  instead of defense stocks, I've linked to an article that'll be more helpful to you.) 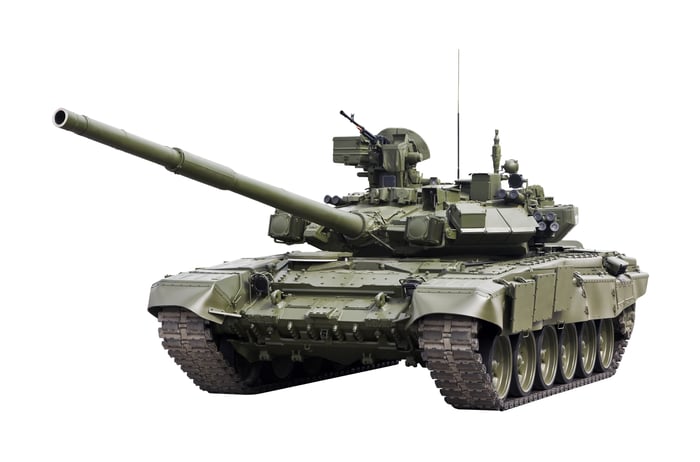 Parts that add up to a whole

Take the Abrams main battle tank as an example. General Dynamics builds the tank, but Rheinmetall makes the gun, American Ordnance the shells that go into the gun, and Honeywell the engine. All four companies (and more) must cooperate to get the tank built.

For that matter, if General Dynamics ever stopped making tanks, Textron or BAE Systems could step in to fill the gap. And the same holds true for the Pentagon's other armored vehicles, for its aircraft, and for its warships.

American fighter jets are built by Lockheed Martin, Boeing, and Northrop Grumman. General Dynamics and Huntington Ingalls (HII -0.74%) both build our destroyers and submarines. When one defense company loses a "bid" to build a weapons system, it can still often win work on other aspects of the project.

Figuring out which defense stocks to watch may seem a difficult task, then. But often, the individual companies that make up the defense industry act more like parts of a unified "complex." Individual defense companies may win or lose specific contracts, but no one really loses the Pentagon's business -- at least not for long.

After all, with well over $500 billion in money to spend every year, there's plenty to go around. One way or another, chances are good that every defense contractor will eventually get its "fair share" of the loot. And herein lies our opportunity as investors.

This suggests that, if you're investing in the defense industry for the long term, there are two stocks to watch now if you want to profit from the tendency of defense contractors to revert to the mean.

Right now, enthusiasm over the defense industry, driven by events in Ukraine, in Southeast Asia, and in the Middle East, has most defense contractors selling for valuations above one-times sales. But there are two stocks to watch in particular: Huntington Ingalls, which holds the contract to build America's newest class of supercarriers, and L-3 Communications (LLL), a specialist in high-tech sensors and electronic warfare, both cost about 0.8 times sales. If these two companies "revert to the mean" valuation of one-times sales, then each could produce profits on the order of 25% for their shareholders.

Similarly, with most defense contractors today selling for about 17 or 18 times earnings, there may be a value to be found in shares of Raytheon (RTN), which costs less than 15 times earnings. The company's business model, which focuses on selling consumable rockets and missiles to operators of weapons systems around the globe, is red-hot right now. In fact, at a time when U.S. defense spending is in decline, at last report, Raytheon gets a greater percentage of its sales from outside U.S. borders than just about any other defense contractor in America.

Investing in defense companies is more an art than a science. There's certainly no law that says defense stocks must revert to the mean -- only an observation that they often do just that. If you're looking for a handful of defense stocks to watch, in hopes that a reversion to the mean will reward you, I think Huntington Ingalls, L-3 Communications, and Raytheon are a good place to start.

More than just "watching," Rich Smith actually already owns shares of Raytheon Company. You can find him on CAPS, publicly pontificating under the handle TMFDitty, where he's currently ranked No. 342 out of more than 75,000 rated members.

Why Aerospace Stocks Are Rallying Today
420%