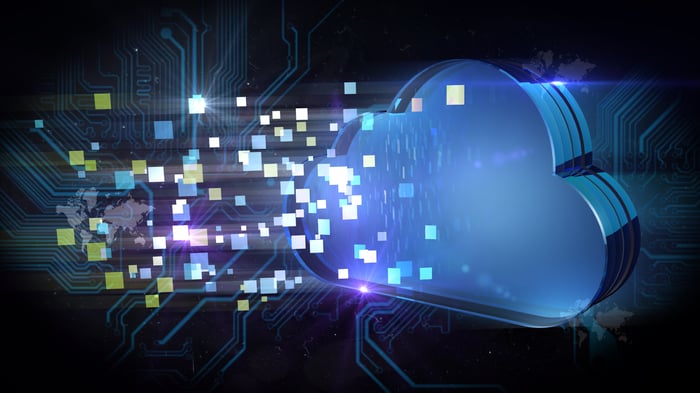 Benioff previously told investors that his goal is to get the company to $10 billion, and it's already near that goal. Last quarter, the pure SaaS play brought in $1.92 billion, growing 27% year over year. Comparatively, Oracle brought in just $690 million in revenue for its SaaS and PaaS businesses. So, what makes Ellison so confident that he can beat Benioff and other cloud companies such as Amazon.com (NASDAQ:AMZN) and Microsoft (NASDAQ:MSFT) to the 11-digit mark?

Ellison told investors that "we expect that the SaaS and PaaS hypergrowth we experienced in FY16 will continue on for the next few years" in the company's fourth quarter earnings release. Last quarter, the segment grew 66% year over year. For the full year, it increased 49%. He says the accelerating revenue growth in PaaS and SaaS ought to continue -- "as we scale our business, our growth rates are going up."

Oracle is operating in nearly every category of enterprise-facing software as a service. Its largest growth drivers are enterprise resource planning and human capital management. Salesforce, comparatively, focuses solely on sales automation. Oracle has software for that as well. "We think that gives us a huge advantage; that our footprint is wider," Ellison told analysts on the earnings call.

Providing a solution for everything may make Oracle more attractive as a sales automation provider. The ability to cross-sell existing customers on new software can help drive sales as well.

But even if sales continue to accelerate to 100% next year, Oracle will still be well behind Salesforce, and less than halfway to that $10 billion goal. It brought in just $2.2 billion in SaaS and PaaS revenue last year. Salesforce is expected to bring in more than that in the fourth quarter alone this year, and analysts expect it to reach $10 billion next year already.

What about the big guns?

Ellison seems to be forgetting about (or at least ignoring) the big cloud infrastructure companies Amazon and Microsoft. Amazon has shifted from pure infrastructure as a service to more platform services lately with the introductions of Elastic Beanstalk and its Internet of Things platform.

Last quarter, AWS brought in over $2.5 billion, putting its run rate above $10 billion. Of course, most of that would be considered part of its infrastructure as a service. Still, Amazon's dominance in IaaS has opened the door for it to compete in the PaaS space.

Microsoft, meanwhile, is the second largest IaaS provider, and last quarter it says its commercial cloud run rate reached $10 billion. It has plans to double that run rate within two years. Microsoft's commercial cloud includes Azure -- its main IaaS business -- as well as Microsoft Dynamics and Enterprise Office 365. While the former might not qualify as PaaS or SaaS, the latter two products certainly qualify as cloud-based software.

Dynamics, like Oracle's cloud business, has its hand in just about every enterprise facing cloud service, while Office 365 has the benefits of the legacy Office software. If Microsoft's SaaS business isn't as big as Oracle's, it's probably close. And with the even broader reach of Microsoft's cloud services compared to Oracle, it could grow even faster by Ellison's logic.

So, it's hard to say Ellison's belief that Oracle will be the first to $10 billion is feasible. But the secular growth of cloud computing puts it in a strong position to experience continued revenue growth for years to come.