Here's what investors will be looking for in the pharmacy benefits manager's upcoming earnings release and conference call.

After falling more than 20% early in the year when its largest customer began demanding billions of dollars in additional savings, shares of Express Scripts (ESRX) have halved those losses in recent months. 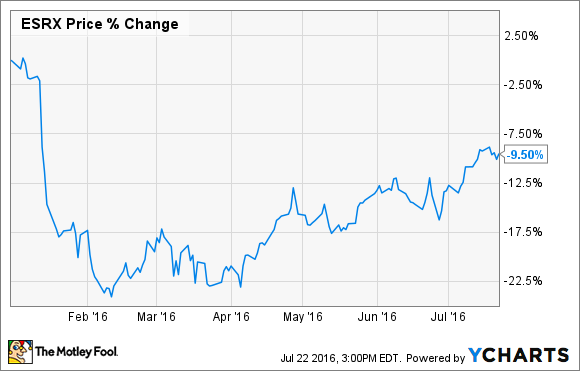 Yet the pharmacy benefits manager remains locked in a heated dispute with insurance titan Anthem (ELV 0.28%) -- which accounts for about 14% of Express Scripts' revenue -- and an unfavorable outcome for these negotiations could leave a sizable dent in the PBM's earnings.

Investors will be looking for an update on this situation -- as well as how well the company's financial results align with management's prior forecasts -- when Express Scripts reports its second-quarter financial results on July 25.

More importantly, investors will be looking for any changes to Express Scripts' 2016 financial outlook. Despite the situation with Anthem, Express Scripts boosted its full-year adjusted EPS forecast to a range of $6.31 to $6.43 in April, up from a revised range of $6.10 to $6.28 issued in February and initial guidance of $6.08 to $6.28 provided back in December. Should the company indicate that adjusted EPS could come in at the high end of its guidance, it could help reassure investors that Express Scripts' business is performing well despite the publicity surrounding its situation with Anthem.

Of course, shareholders will also be on the lookout for any clues as to the status of Anthem's aforementioned lawsuit against Express Scripts.

With the lawsuit still in process, it will likely be difficult for Express Scripts' management to comment on the negotiations, but with so much at stake, investors will be eager to hear any updates management is willing to provide during the company's upcoming conference call.

Express Scripts will announce its second-quarter financial results on Monday, July 25, after the market closes at 4 p.m. EDT. Investors can tune in to its live conference call, where management will discuss the quarter's results at 8:30 a.m. EDT on July 26. Both the release and a link to the conference call will be available on the company's investor relations website.

Why Express Scripts Holding Company Broke Out in December
358%