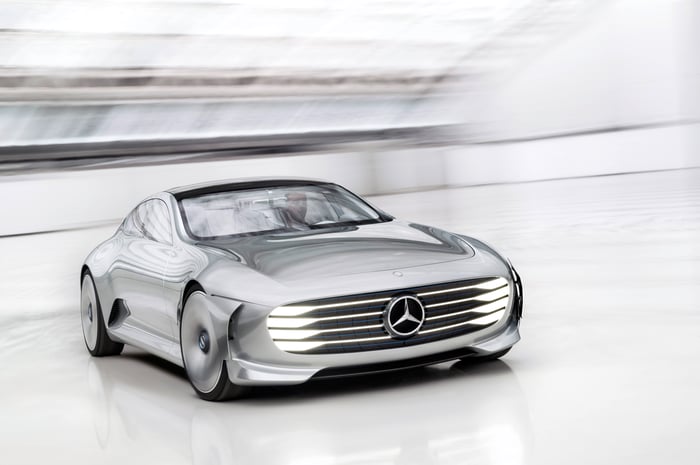 This Mercedes-Benz concept car from last year might be a preview of the styling of its upcoming range of all-electric vehicles. Image source: Mercedes-Benz.

Tesla Motors (NASDAQ:TSLA) loves to point out that sales of its Model S rose sharply last year while other luxury brands' big sedans lost ground. It went so far as to include this chart in its fourth-quarter report to shareholders in February: 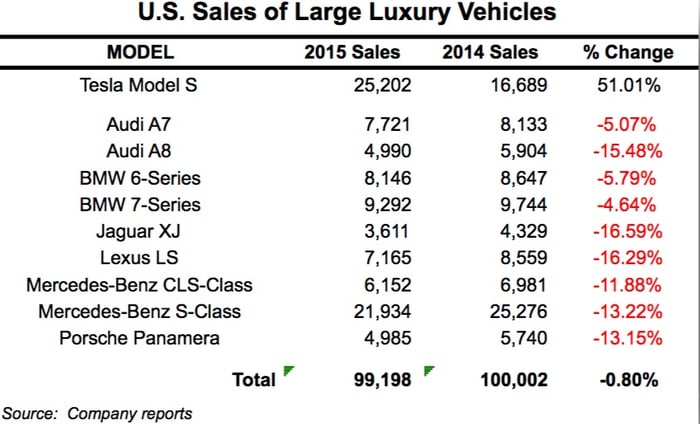 Needless to say, executives at the German luxury automakers don't feel the same love for Tesla's chart. In fact, they're steamed: More and more reports (like this one in Automobile Magazine, in which a Porsche product manager slams Tesla's Model S) suggest that BMW (OTC:BAMXF), Audi, Porsche, and Daimler's (OTC:DDAI.F) Mercedes-Benz unit aren't just gearing up to launch more electric cars. They're out to make Tesla look like amateurs.

The plans to show Tesla how it's done might well backfire, but it should be fun to watch (and it should delight Tesla CEO Elon Musk, who has been urging other automakers to get serious about electric cars). Audi and Porsche got the Tesla-fighting ball rolling last fall, showing concept versions of an electric SUV (Audi) and sports sedan (Porsche) that will come to market over the next few years.

Now it's Mercedes-Benz's turn. The world's oldest automaker recently showed off an electric heavy truck right after Tesla said it planned to create one. In just a few weeks, it will unveil the first of a slew of new "premium electric vehicles" aimed directly at those from Elon Musk's crew.

Here's what we know about the new electric Mercedes

Back in April, I summed up what we knew about Mercedes-Benz's ambitious electric-vehicle program. Briefly: Mercedes has been working since 2014 on a family of new-from-the-ground-up upscale electric cars and SUVs aimed at Tesla. There are at least four vehicles coming (two sedans and two SUVs for starters), they're all expected to have range comparable to Tesla's, and they'll share distinctive styling that is different from current Mercedes products. The styling may have been foreshadowed by last year's "Concept IAA" show car.

Another view of the Mercedes-Benz Concept IAA show car. It's very clearly a Mercedes, but very different from the brand's current models. Image source: Mercedes-Benz.

Now we know a little more. Bloomberg reported last week that Mercedes will create a new sub-brand for the electric vehicles. That's not surprising, given that BMW did the same thing with its "i" sub-brand for the i3 electric and i8 hybrid. But it suggests strongly that the marketing (and maybe the sales process) for these new electric Mercedes will be quite a different from the ways in which Mercedes markets and sells its existing products.

Mercedes will show the first of these new electric vehicles at the Paris Motor show next month. It's expected to be a midsize SUV with a range (on the European test) of around 500 kilometers (about 311 miles). Eventually (we think), it'll be joined by two sedans (medium and large) and another SUV that is said to be larger than any of Mercedes' current SUVs.

All four of these are expected to be on the market by the end of the decade. It's not yet clear when the first one will be launched, but I don't expect it any earlier than late 2017.

How will these new electric Mercedes compare with Teslas?

We won't know for sure until we get a look at what Mercedes plans to build. But here's my prediction:

So will Mercedes steal sales from Tesla?

It'll probably steal some. But it may also draw new buyers to electric cars -- luxury-minded buyers who haven't been willing (for whatever reason) to make the leap to a Tesla. How many? Hard to say right now. There's still a lot we don't know, including how many Mercedes plans to build.

If Mercedes' electric vehicles are strong competitors, if they sell well, and if Mercedes is aggressive with pricing, that could force Tesla to cut its prices to stay competitive. That in turn will squeeze Tesla's margins, which might put a crimp in its ambitious plans.

That's the most obvious risk to Tesla from a business perspective. But there's a more subtle risk: If Mercedes' products are strongly competitive, that will make Tesla seem a little less special, its story a little less remarkable. What will that do to Tesla's pricing power -- and its stock price, and its ability to raise the capital it will need to fund its ambitions?

Hard to say from here. But we'll start to see how it might go when Mercedes unveils its new electric SUV next month.