Please ensure Javascript is enabled for purposes of website accessibility
Log In Help Join The Motley Fool
Free Article Join Over 1 Million Premium Members And Get More In-Depth Stock Guidance and Research
By John Rosevear - Updated Apr 17, 2019 at 11:25AM

Daimler is teaming up with a Chinese automaker to build electric Smarts in China.

It's an interesting move for both companies, one that deepens the already substantial ties between the world's oldest automaker and a new one with global ambitions. Here's what we know. 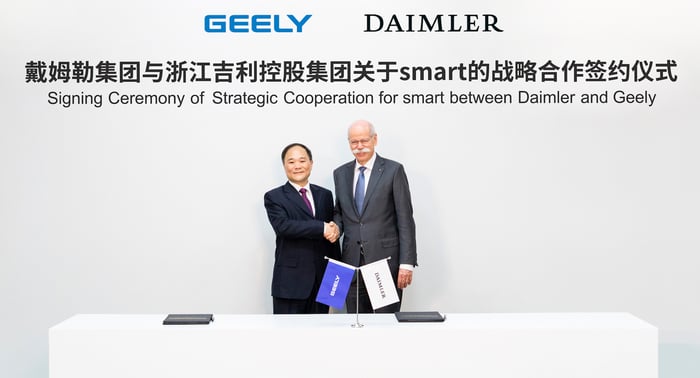 Daimler and Geely say they have signed a "strategic cooperation" agreement, under which they will create a 50-50 joint venture that will build all future Smart models in a brand-new "purpose-built" factory in China, with global sales expected to begin in 2022.

All of those future Smart models will be electric, but they won't all be tiny city cars. Daimler and Geely say they will expand the brand into the so-called "B segment," subcompact cars one size up from current Smart models. (The Ford Fiesta and Honda Fit are both considered subcompact or B-segment cars.)

Those future Smart models will be engineered by Geely with help from Daimler, and styled by Daimler's Mercedes-Benz Cars unit.

Smart is Daimler's brand of small, fuel-efficient city cars. Launched in 1998, the original idea was that Smart's little cars would help Daimler meet average fuel-economy standards without having to build smaller Mercedes-Benz models that might devalue the luxury brand.

Back in 2016, Daimler said that it planned to develop three battery-electric vehicles for the Smart brand, and that the brand would be all-electric by about 2020. But the open question has been how much money Daimler would be willing to spend to make that happen, as Smart has never been profitable. The company doesn't report results for Smart separately, but some analysts estimate that it may lose as much as 700 million euros ($785 million) every year. 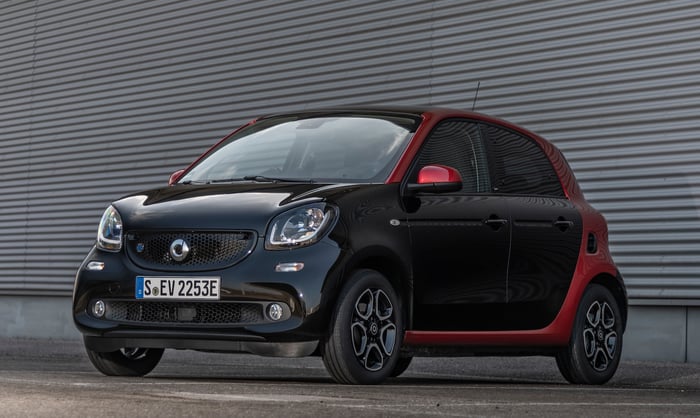 An electric Smart EQ ForFour city car. The next generation of electric Smart models will be built in China by a new joint venture. Image source: Daimler AG.

Smart sold 128,802 vehicles globally in 2018, down 4.6% from 2017 (and a small fraction of the roughly 2.4 million vehicles sold by the Mercedes-Benz Cars unit last year). But as Daimler made a point of noting in its annual report, sales of Smart's current electric model doubled in 2018 versus the year prior.

Geely is one of the biggest Chinese automakers, and it may be the most ambitious. Unlike most of its domestic rivals, which grew out of state-owned enterprises, Geely is a young company still run by its founder, entrepreneur Li Shufu.

Of note: Li is Daimler's largest investor. He bought just under 10% of the German automaker last year.

For Daimler investors, it may mean that the company has found a way to get the regulatory benefits of selling small, inexpensive electric vehicles without having to bear (all of) the costs. Even if Daimler only manages to get its Smart investment to breakeven, that will be a significant improvement over the status quo.

And for Geely? Like all Chinese automakers, Geely is under pressure to build and sell more electric vehicles, particularly small commuter vehicles -- but doing that profitably has been a challenge. The Smart brand, with its Daimler connection, should have a more pricing power with Chinese consumers than a homegrown Chinese brand would, meaning that profitability is a safer bet.

But Geely is thinking far beyond China here. Li has made no secret of his company's global ambitions, but he knows that it'll take time for Western consumers to accept Chinese-made vehicles. Selling Chinese-made vehicles under familiar Western brands is a promising route to wider acceptance outside of China as well.

Long story short: This deal has the potential to boost Daimler's bottom line, Geely's global presence, and sales (in China and elsewhere) of small, affordable electric vehicles. If it works out, it's a win-win-win.