German auto and truck maker Daimler AG (OTC:DDAI.F) cut its 2018 profit expectations, warning that new tariffs on vehicles exported from the United States to China are likely to hurt sales of the high-profit Mercedes-Benz SUVs it builds in Alabama for global markets.

It's yet another sign that ongoing trade disputes between the U.S. and other countries may not work out as well as the Trump Administration has hoped. More broadly, Daimler's profit warning is also a warning to investors in other automakers: The end of the global auto-sales boom may not be far away. 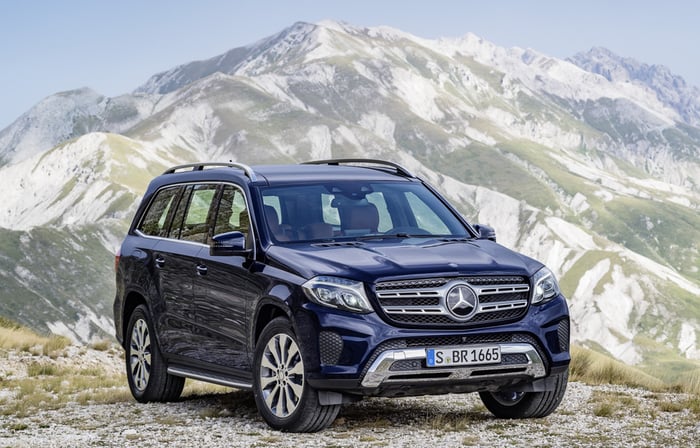 Made in USA: The Mercedes-Benz GLS luxury SUV is one of several Mercedes vehicles built in Tuscaloosa, Alabama, and exported to other markets, including China. Image source: Daimler AG.

In a statement on Thursday, Daimler said it is lowering its 2018 pre-tax earnings expectations for three of its five business units, and for the company overall.

As a result, Daimler said its overall EBIT will be slightly lower than its 2017 result, at 14.68 billion euros. Its earlier forecast had called for 2018's EBIT to be slightly higher than 2017's.

President Trump has said that trade imbalances between the U.S. and other countries threaten America's national security. He has proposed to place tariffs on several categories of imported products, including vehicles. Separately, he has also promised to impose tariffs on a wide range of Chinese goods, a promise that produced a threat of retaliation from China.

It's that latter threat (from China) that Daimler is citing here. The German automaker isn't alone in its concerns. Volvo Cars has a brand-new factory in South Carolina, built with the expectation that its products will be exported from the U.S. to other countries, and Volvo Cars CEO Hakan Samuelsson warned on Wednesday that plans to hire 4,000 workers at that new factory are now at risk, according to a Reuters report.

European automakers aren't the only ones that stand to lose if China imposes new tariffs on vehicles imported from the United States. Ford Motor Company (NYSE:F) exports several key vehicles, including the high-profit Lincoln Navigator and Ford Mustang, from the U.S. to China; higher tariffs will force Ford to raise prices in China, hurting the Blue Oval's already-suffering sales in the world's largest new-vehicle market.

In a separate but related development, Daimler has banded together with BMW AG and Volkswagen AG to propose that existing vehicle tariffs between the U.S. and the European Union be abolished entirely. (The EU currently imposes a 10% tax on vehicles imported from the U.S.; Trump has threatened a retaliatory tariff.) That would help all three of them, of course -- but it would also likely help Ford and Fiat Chrysler Automobiles, both of which are significant players in the European market.

The takeaway for auto investors: Tariffs could clobber profits

Auto sales around the world have boomed since the 2008-2010 recession, and auto investors have ridden that boom to nice profits. But as Daimler's warning reminds us, most global automakers are dependent on (relatively) free trade: If the president's trade war leads to retaliatory tariffs that drive retail prices for many vehicles higher, this long-lived auto boom could quickly turn into a bust.