Ford Motor Company (NYSE:F) said that its sales in China fell 29% in May from a year ago, to 61,744 vehicles, continuing a trend of precipitous declines in sales of Ford-brand vehicles in the world's largest new-car market.

Year to date, Ford's sales in China are down 22% from the same period a year ago. 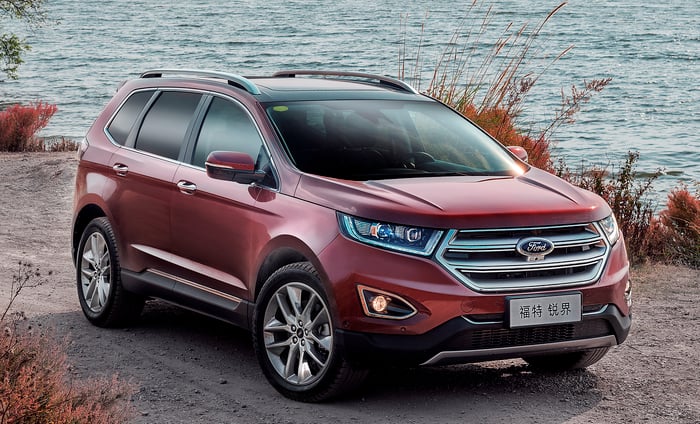 Not long ago, this special seven-seat version of the Ford Edge was a hot seller in China. But sales have plummeted: Year to date through May, Edge sales are down 23%. Image source: Ford Motor Company.

Here are the results reported by Ford for each of those categories in May:

Why are Ford's sales down so much?

Here's another way to look at those sales numbers that gives us a clue to what's happening. Sales of Ford-brand vehicles fell 40.4% in China in May; meanwhile, combined sales of Yusheng, JMC, and Lincoln vehicles rose 4.7%.

This seems to be a Ford-brand problem. It may be that Ford has become old news in China, which is the fastest-moving major auto market in the world. Ford's product-launch cadence has fallen behind faster-moving rivals, and there's a sense that Ford hasn't kept pace with Chinese market trends.

It's also possible that the ongoing war of words between the Trump administration and the Chinese government may be starting to dent Ford's sales in China. There are precedents for this: Back in 2012, Chinese sales for Toyota, Honda, and Nissan all fell sharply during a dispute between the Chinese and Japanese governments over ownership of a group of islands.

Ford is a very, very American brand; if Chinese consumers are feeling upset with the United States, it certainly won't help the Blue Oval's sales.

Here are the sales results for the five top-selling Ford-brand vehicles in China. As you can see, the numbers are not good:

Take particular note of the sales results for the Edge and for the Kuga, which is the Chinese version of the Ford Escape. Like Americans, Chinese auto-buyers are increasingly favoring crossover SUVs, a Ford specialty. But Ford's mainstays, both of which are locally built and thus not priced particularly high because of import tariffs, are a tough sell right now.

It's especially tough because the Edge isn't all that old, having been launched just three years ago. What's more, Ford builds the Edge in a special longer-wheelbase version for China, with three rows of seats, and that variant was very popular for a while. But sales of both have slid sharply along with the rest of the Ford-brand lineup.

Ford can fix this, but it will take time

Ford is working on an elaborate overhaul of its China lineup, part of what it calls a "repositioning" effort that will unfold between now and 2025. The plan calls for 50 new-to-China products over the next seven years, along with changes to Ford's operational structure in China that have already begun to happen.

The first new Fords will include all-new versions of the Focus and the Escort, still the company's top sellers in China, along with three new or revamped SUVs for Lincoln and a version of the midsize Ranger pickup. (The Escort is a value-priced China-only compact sedan based on the Focus; the global Focus is positioned as a premium offering in China.)

Those will help. But it seems likely that Ford's sales in China will need more than a few new models to fully recover. Investors should be prepared to be patient here.