For the second time in four months, German car and truck maker Daimler AG (OTC:DDAI.F) has cut its full-year profit estimates. Daimler, the parent company of Mercedes-Benz and Freightliner trucks, now expects its full-year operating profit to fall by more than 10% from its 2017 result due to increased expenses related to government crackdowns on the emissions from diesel engines.

Ahead of its full third-quarter earnings report, Daimler also warned that its third-quarter operating profit fell 27% from the year-ago period. 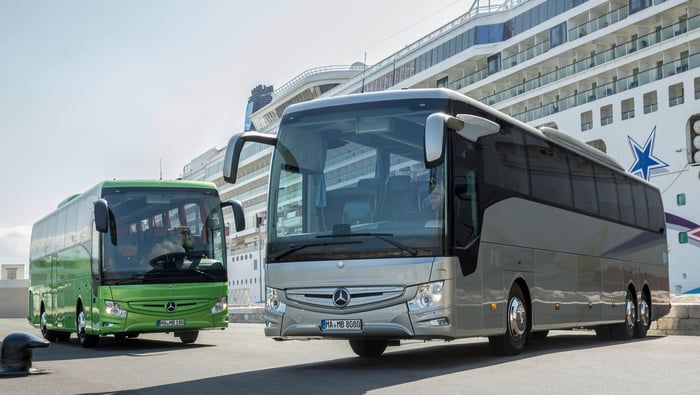 Sagging demand for buses is just one of several factors that led Daimler to cut its 2018 guidance. Image source: Daimler AG.

In a statement dated Oct. 19, Daimler lowered its 2018 pre-tax earnings expectations for two of its five business units, and for the company overall.

As a result, Daimler now expects its overall 2018 EBIT to be "significantly below" its 2017 result of 14.68 billion euros. Its prior guidance had called for its full-year EBIT to be "slightly lower" than 2017's.

What Daimler said about its third-quarter result

Daimler also warned about its third-quarter earnings, releasing preliminary EBIT results that it said were "significantly below market expectations."

This is the second time that Daimler has revised its 2018 full-year guidance downwards. The first cuts, in June, were a response to concerns about trade disputes between the U.S. and other countries. Daimler builds some Mercedes-Benz SUVs in Alabama; a portion of those are exported from the U.S. to other markets.

Daimler's June guidance cuts were the first by a global automaker this year. But rising commodity costs, concerns about tariffs, the costs of complying with stricter diesel-emissions rules, and slowing sales have put pressure on most of its rivals. BMW AG, Ford Motor Company, and General Motors have all revised their 2018 guidance downwards since Daimler's June statement.

What's next for Daimler?