One size smaller than a Fiesta, the tiny Ford Ka sedan is a big seller in South America. But tough economic conditions have kept Ford in the red in South America for over two years now. Image source: Ford Motor Company.

South America has been a tough spot for Ford Motor Company (NYSE:F) for a few years now. The Blue Oval lost $1.16 billion in South America in 2014 and another $832 million last year -- and the losses have continued into 2016.

The challenge: Steep recessions in key markets like Brazil and Argentina have clobbered new-car sales across the industry, and discounting has dented profit margins further.

To no one's surprise, Ford posted another loss in South America in the second quarter. But there was a glimmer of good news in the company's latest report.

Why Ford has continued to lose money in South America

Ford's pre-tax loss in South America was $265 million in the second quarter versus a $185 million loss a year ago. Wholesale shipments and revenue both fell, and Ford's decision to limit its margin-crushing discounts cost it in terms of market share as well. 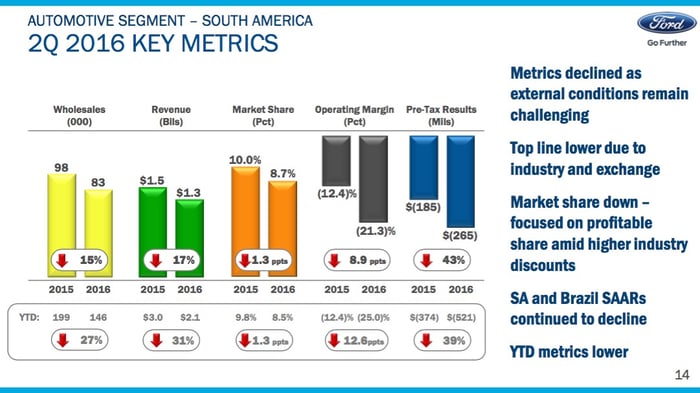 "South America [in the second quarter] was a story that is very much what it has been over the last number of quarters," CFO Bob Shanks said during Ford's second-quarter earnings call. "External conditions, particularly in Brazil continue to be pretty challenging. We saw a decline in the top line as you can see, double digits. Revenue was down 17%. That decline is entirely due to the weaker currencies. Market share was down as we focused on the most profitable parts of our portfolio, amid increasing discounts across the industry. You can see the results in terms of margin and pre-tax results. This is largely what you have been seeing through the first half [of 2016]. I will say that [Ford's executive team in South America] continues to do a good job of focusing on the things that it can manage, particularly on cost."

The next slide shows the factors that helped and hurt Ford's second-quarter result in South America versus its result from the second quarter of 2015. 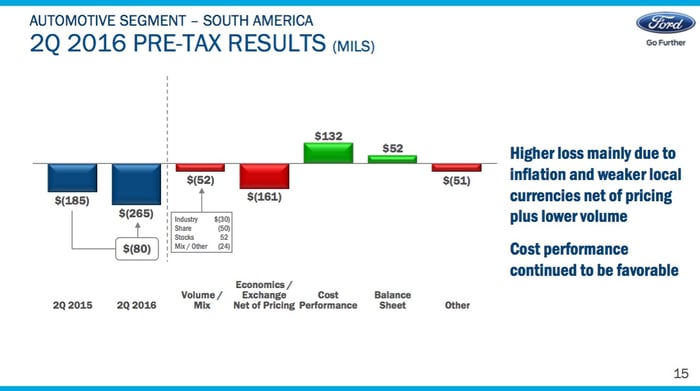 As you can see, Ford's result was hurt by lower sales volumes, pricing pressures, and exchange-rate swings. But there was a $132 million bright spot. "We once again delivered very strong cost performance," Shanks said. "If you think about the last year, we have delivered over $400 million of good news on cost performance [in South America]."

"But as you can see just to the left of that, we continue to see difficulties in [competitively increasing] pricing enough to be able to offset the effects of high local inflation and the weaker local currencies," Shanks added.

But, Shanks said, things might be starting to look up.

But Ford thinks things might start to improve soon

Later in the conference call, Shanks was asked whether signs of improving fundamentals in the Brazilian economy might affect Ford's outlook for the rest of the year and into 2017 in South America.

"I think it's a little bit too early," Shanks said, noting that the improvements have yet to be seen in the pace of new-car sales in the region. But, he said, Ford is starting to think that an improvement might show up next year.

"Our early view is that there could be very, very, very, small levels of growth [in Ford's bottom line in South America] next year," Shanks said. "Nothing to quite hum about, but it would be great to see a positive number with no brackets around it."

Shanks said that Ford will give more detail on its expectations for 2017 during its annual briefing in October. But the hint is that it might guide toward a small profit in South America next year. That would be happy news for Ford shareholders.