Ford lost $832 million in South America in 2015, and it has warned that it expects to lose even more in 2016. But the Blue Oval wants shareholders to know that it's making the most of a very tough situation.

Ford's tiny Ka sedan has been a big seller in Brazil, despite a slumping market. Its success has helped Ford make the most of difficult economic conditions in South America. Image source: Ford Motor Company.

Ford is staying afloat despite very tough economic conditions
In a nutshell, here's what's going on: Major recessions in Brazil and Argentina, and an economic mess in Venezuela, have put a big dent in new-vehicle sales across the entire industry. That situation worsened in the fourth quarter.

"We actually grew market share [in South America] for the full year, and we grew our share I think in each of the quarter leading up to [the fourth quarter] on a year-over-year basis," Ford CFO Bob Shanks told me when I asked him about South America last week.

"But what we saw in the fourth quarter was that things got worse and worse. We saw discounting increase quite a bit across the industry. [Some of Ford's competitors] were just trying to keep their plants going, at least to some degree. And we chose not to participate in that," Shanks said.

In other words, some automakers cut their prices to try to boost sales rather than shutting down assembly lines. But Ford decided instead to let its sales fall in order to at least partially preserve its pricing power. The upshot was that Ford lost market share.

As you can see from one of the slides Shanks and I were discussing, Ford's overall market share in South America fell to 8.4% in the fourth quarter from 9.4% in the year-ago period. 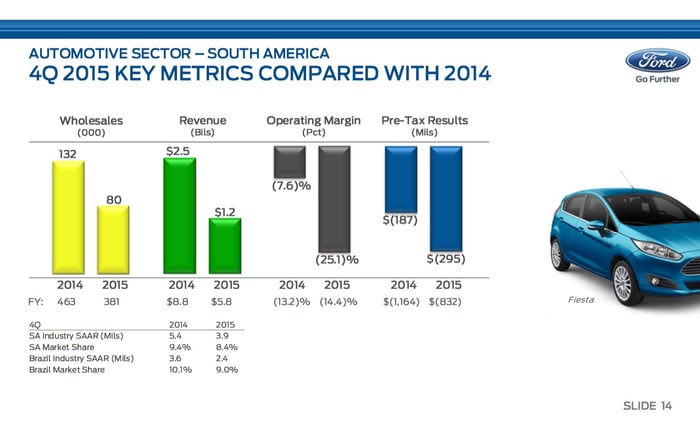 But also note that the SAAR, a measure of the pace of auto sales, also fell sharply. In the fourth quarter of 2014, new vehicles in South America were selling at an annualized rate of 5.4 million a year. By last quarter, that had fallen nearly 28%, to a rate of just 3.9 million a year.

In other words, Ford was getting a somewhat smaller share of a significantly smaller "pie" of new-car sales.

But there's a silver lining here, Ford says
But Ford wants us to know that it's coping with the situation fairly well, under the circumstances.

Shanks noted that Ford's loss from the shrinking of that overall "pie" was much more substantial than its loss from the market share it gave up, mostly because the company did a good job of preserving its pricing and controlling its costs in the region. 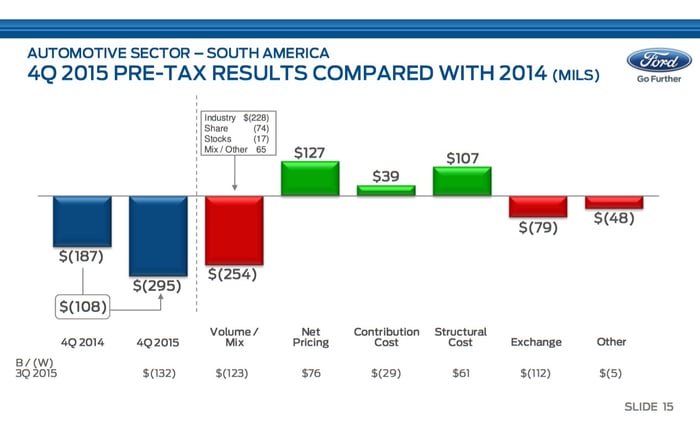 As you can see in the callout box over "Volume/Mix," Ford attributed $228 million of the year-over-year decline to "Industry," three times the $74 million it attributed to the market share it gave up. And that loss in market share was more than offset by the financial gains from Ford's decision to preserve its improved pricing.

"We also had favorable cost performance," Shanks said. That's shown in the slide under "Structural Cost." "Even though within those numbers, we had over $100 million of inflation effects." In other words, Ford was able to reduce its costs in dollars despite high rates of inflation in Brazil and other key markets.

It's not going to get better any time soon, but Ford's making the best of it
Shanks and his boss, Ford CEO Mark Fields, have said they expect Ford's loss in South America in 2016 to be even greater than the $832 million it lost in the region 2015.

For Ford shareholders, that's not a huge thing to worry about. The company is still doing very well in North America, its turnaround efforts in Europe have already put that region into the black, and it's starting to see returns on the $5 billion it spent expanding in Asia over the last few years.

South America will weigh on Ford's results in 2016. But it looks like Ford's managers in the region are in fact doing a good job of minimizing the damage to the company's bottom line. As big as the losses are, that's still good news for long-term shareholders.

John Rosevear owns shares of Ford. The Motley Fool recommends Ford. Try any of our Foolish newsletter services free for 30 days. We Fools may not all hold the same opinions, but we all believe that considering a diverse range of insights makes us better investors. The Motley Fool has a disclosure policy.