A crucial and perhaps underappreciated part of building a healthy portfolio that can stand the test of time is knowing which stocks not to buy. Companies with shaky balance sheets or poor managerial teams can wreak havoc on your portfolio's performance. To help investors avoid potential landmines, we asked three of our Foolish contributors which stocks they're avoiding at the moment, and why. Here's what they had to say.

You made me promises, promises you knew you'd never keep

Tyler Crowe: As wonderful as the idea sounds that we could move away from fossil fuels through innovations like hydrogen fuel cells, one company that just doesn't deserve to be an investment is hydrogen fuel cell company Plug Power (NASDAQ:PLUG). Sure, the company has grown sales and developed decent partnerships with customers that could lead to a large ramp up in scale. It also has targeted a niche market -- materials-handling vehicles for warehouses -- that should be a profitable venture. The problem with investing in this company is that management has repeatedly missed its own targets for meeting cost and profitability metrics for years, and it doesn't seem anywhere close to being a profitable venture.

Let's turn back the clock to 2014. On a company conference call, the company outlined its plans that would lead to being breakeven on an earnings before interest, taxes, depreciation, amortization, and stock-based compensation (EBITDAS) basis by the third quarter of 2014 on a revenue run rate of $58 million annually. Almost two years on, that annual revenue run rate has risen to $108 million, and the company's operational losses continue to widen. Of course, every time this happens, management has a reason why, and then projects profits to be just around the corner; but there are so many times that management can promise progress on cost control before investors become increasingly skeptical.

Could fuel cells be a long-term part of the fossil-free energy future? Possibly, but investing in Plug Power isn't one of the ways for investors to do it.

No winners in this guessing game

Neha Chamaria: What do you do with a company that promises, but fails, to execute, year after year? You don't touch it with a 10-foot pole. Sorry Westport Fuel Systems Inc. (NASDAQ:WPRT), but you've tested investors' patience long enough.

Don't get me wrong. I still believe Westport's natural-gas engine technology holds a lot of promise as the world moves toward cleaner fuels to reduce emissions. It's just that it could take years to materialize into anything meaningful for investors in the company.

Macro hurdles aside, what really perturbs me is the way management has consistently failed to deliver on its promises. Take Westport's latest quarterly report, for example. First, management didn't provide full-year guidance as promised, blaming a delayed completion of Westport Innovations' merger with Fuel Systems Solutions.

Second, and worse, Westport failed to turn consolidated adjusted EBITDA (adjusted earnings before interest, taxes, depreciation, amortization, unrealized foreign-exchange gains or losses, and other non-cash items) positive by mid-2016 -- a goal that management has already pushed several times in the past few years. It's another story that adjusted EBITDA, as a metric, makes little sense anyway.

Westport's revenues have dropped in the past five years, and the company may have a long way to go before it can break even. 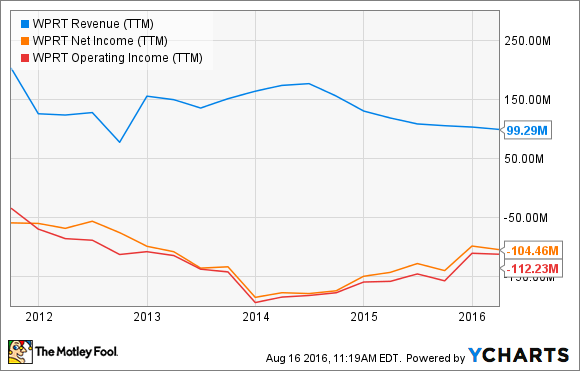 Bulls may point at Westport's improved prospects after its merger with Fuel Systems and its upcoming HPDI 2.0 technology for trucking markets. But until Westport can make its products viable by converting sales into profits, shareholders gain nothing out of investing in the company. When will that happen? My guess is as good as yours.

This ship has sailed

George Budwell: Inhaled insulin products were once touted as a major advancement in the management of diabetes. After all, who likes needles? So it's not surprising that retail investors flooded into MannKind Corp. (NASDAQ:MNKD), heading into and following the approval of its inhaled insulin product Afrezza.

The drug's anemic commercial launch, combined with Sanofi's (NASDAQ:SNY)decision to terminate its marketing agreement with MannKind, have caused the biotech's shares to crash over the last year: 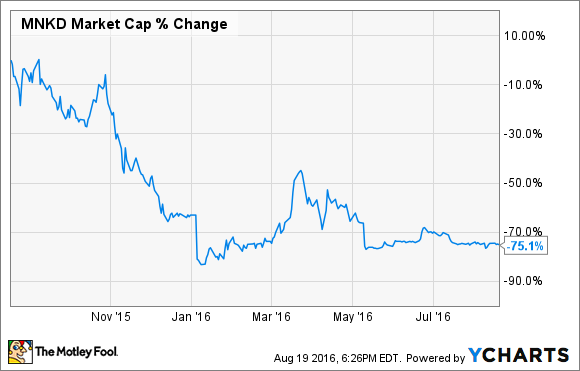 While some beaten-down biotech stocks can be construed as bargains, MannKind simply isn't one of them. In fact, this company appears headed to either a fire sale, or bankruptcy court.

In the second quarter of 2016, for instance, MannKind posted a net loss of $30 million, but only had $63.7 million remaining in cash and cash equivalents. Now, the company has around $80 million left under its loan arrangement with the Mann Group combined with its existing ATM facility. That's the good news.

The bad news is that MannKind still owes roughly $70 million to Sanofi, and it's hard to see where the company can cut any more fat to reduce costs to extend its cash runway. Making matters even worse, analysts following the stock are forecasting Afrezza sales to come in at around $15 million for the entirety of 2017. Although such growth would represent something along the lines of a 500% plus rise in sales year over year, that's still nowhere near enough revenue to keep MannKind afloat beyond next year.