Cheniere Energy Partners (NYSEMKT:CQP) is a curious dividend stock. By almost every financial metric, it would seem that the company's payout would be seriously compromised. Yet for years Cheniere has continued to pay its shareholders. While this may seem like a puzzling situation, there is some logic behind it. Let's take a look at why Cheniere Energy Partner's dividend might look shaky, but investors probably don't need to worry too much about it.

One thing that immediately pops out when looking at the financials of Cheniere Energy Partners is that the company has been paying out a distribution to investors from what is basically a non-existent cash flow. If this were any other company, it would be reason to be running for the hills. For Cheniere Energy Partners, though, this is somewhat by design.

When Cheniere Energy (NYSEMKT:LNG) spun off Cheniere Energy Partners back in 2007, The original intent was to help raise capital for its Sabine Pass liquefied natural gas (LNG) terminal and create a dividend-paying entity that would capture the benefits of long-term LNG contracts. Thing is, though, is that this was for the LNG terminal that was intended to import LNG, not export it. This was before we had successfully tapped shale reservoirs as a natural gas source and it was assumed that we would need to import large quantities of LNG to meet our gas needs. Cheniere Energy Partners needed to do a quick pivot to an LNG export terminal once it was apparent that we would have way more gas than we need.

to make this happen, though, it would require the company to raise immense amounts of capital and take years of construction. During this time, there would have been practically no incentive to own shares of Cheniere Energy Partners had it completely suspended its dividend. So the partnership continued to pay a distribution to shareholders as sort of a "Thanks for being patient while we renovate." While Cheniere Energy Partners was able to use a little bit of revenue from legacy contracts related to the gas import business, the biggest source of cash for those dividends was debt.

Clearly, paying shareholders from issued debt is in no way a sustainable situation. However, that situation should be coming to an end soon as its Sabine Pass facility wraps up construction and starts actual LNG export operations.

Today, the first of four liquefaction trains has been completed and a second one is expected to start up later this year. As these facilities come online, Cheniere Energy Partners will start to be able to realize the revenue that will come from the huge long-term contracts the company has in place. 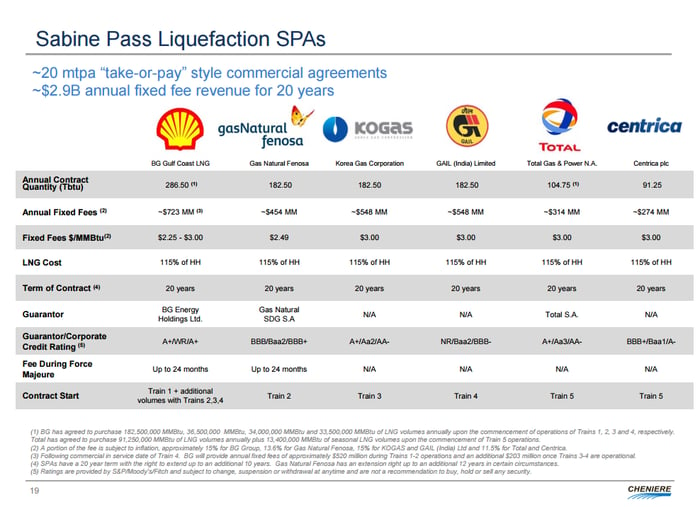 As these contracts start to bring in cash and construction expenses decline, cash from operations should be more than enough to cover its current payout for shares that currently are entitled to distributions and Class B and subordinated shares that do not currently receive distributions.

According to the covenants that dictate the company's payout, though, Cheniere Energy Partners isn't allowed to raise its payout until the company pays off any debts that were taken out to pay prior dividends. Once that is complete and every different class of stock -- common, Class B, and subordinated -- receives an equal distribution based on the company's payout tiers, only then will it be able to increase its payout. This convoluted corporate structure and different class stocks is something that management has hinted at getting rid of in its first earnings conference call.

The bottom line is that after years of paying out cash that the company didn't really have, it's hard to imagine the company not continuing this practice now that it is so close to the finish line. With the rest of Sabine Pass' phase one facilities expected to be complete by the end of 2017, it's only a matter of time before the company starts to bring in a steady stream of cash. So it would appear that the Cheniere's current dividend will remain intact.

That being said, investors shouldn't expect large increases in dividend payments anytime soon. There are a lot of IOUs to make good on before the company can put any more cash toward paying shareholders. At a dividend yield of 6.3%, though, it's a pretty decent payout.