Ford probably won't enter the ride-hailing business itself. But it has a plan that could lead to big profits, and it's about more than building the cars.

Ford Motor Company (F -5.54%) has said that it plans to start mass-producing a fully self-driving car in 2021. But it won't sell that car to customers, at least not at first. Instead, Ford will make its self-driving vehicles available to ride-hailing and ridesharing services in specific areas.

Some investors think that ride-hailing services with self-driving cars will make traditional car ownership obsolete. Is Ford sowing the seeds of its own destruction?

On the contrary, Ford executives say. The Blue Oval has a plan to make plenty of money before, during, and after this technological transformation.

Why Transportation as a Service threatens traditional car ownership

In a presentation at Ford's Investor Day earlier this month, global product chief Raj Nair outlined the Blue Oval's plan for becoming a player in the emerging market for Transportation as a Service, a category that covers ride-hailing services like Uber, as well as car-sharing and automated-shuttle-bus services.

The plan starts with this insight: Autonomous vehicle (AV) technology will be the key to lowering the costs of such services enough to make them cheaper than owning a car outright. 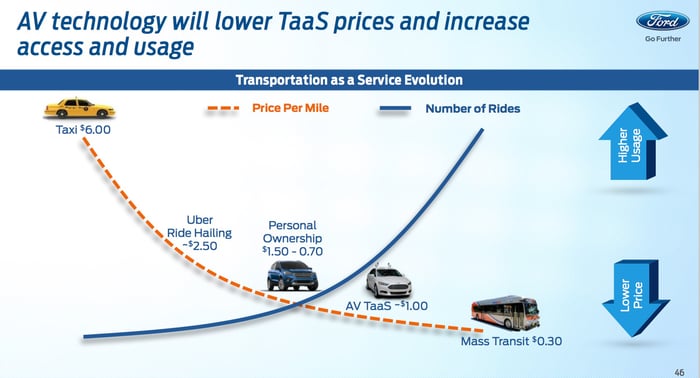 As Nair explained, the biggest contributor to costs in a ride-hailing service is the need to pay the (human) driver. When that goes away, the costs drop significantly -- below the $0.70 to $1.50 per mile that Ford estimates is the average cost of owning a car.

That remains true even assuming that the self-driving vehicle will cost more than a regular car, Nair said.

So is Ford planning to start its own Uber-like ride-hailing service?

Not quite -- or at least if it is, Nair's presentation didn't hint at it.

But Ford sees another profit opportunity beyond just building and selling the self-driving cars to companies like Uber or Lyft. "If we were to have a fleet of autonomous vehicles, the management of that fleet, all the way from the vehicle acquisition through to financing, the insurance, the maintenance and even to the disposal of that, is a business opportunity that could be enabled by the autonomous vehicle," Nair said. 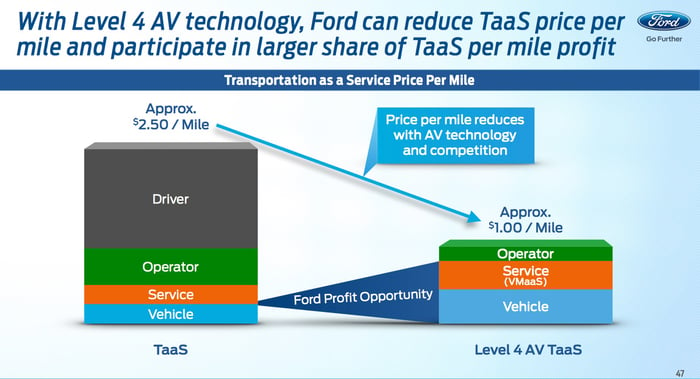 How big is this potential market for Vehicle Management as a Service, or VMaaS? It could be $100 billion to $400 billion a year, Ford thinks. Jim Hackett, the chief of Ford's Smart Mobility subsidiary, explained that there's already substantial interest from Ford's long list of existing fleet customers:

We're talking to large fleet customers already. I'm seeing people wanting to come and talk to me after [Ford CEO] Mark [Fields] announced the arrival of the AV vehicle in 2021. They're calling up and saying, 'We'd like to turn over our fleet to you when that vehicle comes.' So we're in the effort now of trying to value these other things, for example, the Fintech platform, what would the payment systems potentially be.

The upshot: Ford is hoping to boost its profits as the auto industry evolves

Simply put, Ford sees a lot of profit potential in opportunities like VMaaS.

When things are going well, the operating profit margin in Ford's traditional business is around 8% to 10%. Hackett, who is spearheading Ford's push into mobility services like VMaaS, is targeting margins of "at least 20%" for these emerging opportunities.

If that pans out, and if Ford finds enough of those kinds of opportunities, it could change the way investors look at the Blue Oval.